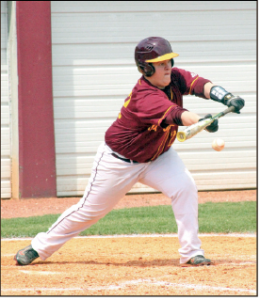 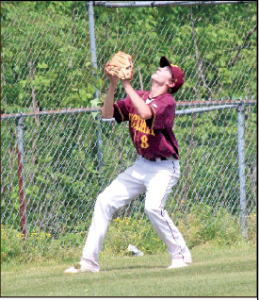 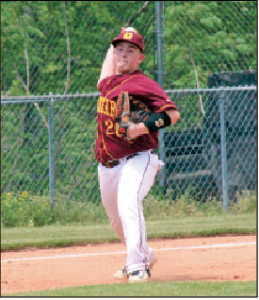 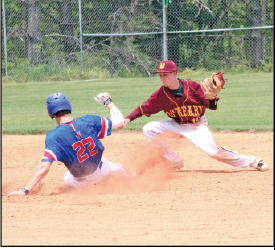 Blake Corder applies a tag on a Model baserunner.

A 7-run 5th inning propelled the Raiders to a 14-9 win over Model Saturday, improving their record to 6-12 on the season.

Blake Corder, Nathan Goins and Evan Kidd each had a big day at the plate for the Raiders, combining for 8 hits, 5 runs and 8 batted in.

McCreary broke a 7-7 tie in the bottom of the fifth inning with their offensive outburst as the first 7 batters who stepped to the plate all reached safely as they broke the game open.

After a walk to Zech Moore opening the inning, Gunner Perry reached on an error and Riley Richmond singled to load the bases. Connor Campbell drew a walk to drive in the first run of the frame, followed by RBI singles from Grant Hamner, Corder and Goins for an 11-7 lead. Kidd hit a sacrifice fly to plate a run and a Justin Trammel sacrifice bunt drove in the final run of the inning.

Previously the Raiders battled back from a 7-2 deficit with a 5-run 5th. Doubles from Moore and Goins bookended the inning, which included singles from Richmond, Hamner and Corder.

Model would add solo runs in the sixth and seventh, but were unable to erase the deficit.

The Raiders host Pulaski County Thursday, followed by a road game at Casey County Friday and a home game against Burgin on Saturday. Next Tuesday McCreary travels to Barbourville.