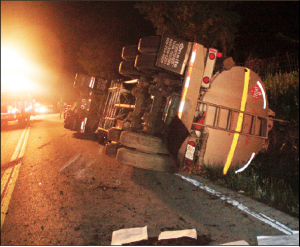 According to McCreary County Emergency Management Director Stephen McKinney, the driver of a fuel tanker was traveling westbound on Highway 92 when he failed to negotiate a curve around 11:00 p.m.

The tanker overturned into a ditch on the north side of the road, spilling approximately 2,000 gallons of fuel.

The driver was transported by McCreary County EMS for treatment of minor injuries in the accident.

Compounding issues was the geography where the accident occurred. As it was at a higher elevation, the fuel flowed downward toward Williamsburg along ditch lines.

McKinney said the fuel traveled about one mile along the road, but it did not appear to have impacted any streams or waterways.

Kentucky Vehicle Enforcement and Crews from Hazmat 12 out of Pulaski County were dispatched to the scene to assist in clean up. Crews vacuumed the ditch lines to remove fuel and also transferred the un -spilled fuel from the tanker once it was righted.

The roadway was shut down during the initial clean-up process, with one lane being reopened at 2:15 p.m. Friday afternoon. The entire roadway was open for traffic around 4:00 p.m.

The Environmental Response Team, along with contractor Eco-Tech will be conducting soil and water tests over the next few weeks. Contaminated soil will have to be replaced with the bad soil removed to a special landfill.

During that process there may be times when traffic on the road is restricted to one lane.