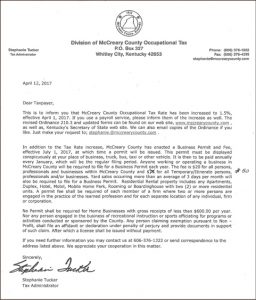 A copy of the letter issued to businesses last week informing them of the changes to the Occupational Tax and the new business license requirements.

McCreary County business owners have started to receive official notification of the new Occupational Tax rate and Business License requirements in the mail over the past week.

Both the tax increase and business license, which were approved by the Fiscal Court in March, are managed through the Occupational Tax Office, run by Tax Administrator Stephanie Tucker, who issued the letters.

The notification, dated April 12, informs taxpayers of the new OC Tax rate of 1.5 percent, which went in to effect on April 1.

With Occupational Tax receipts projected to top $1 million for the next fiscal year, an estimated $500,000 of additional revenue is expected to be added to next year’s budget as a result. When the motion was passed by the Fiscal Court a provision was added to the ordinance stating all money raised by the additional half percent would be dedicated toward the jail fund.

As the tax increase will only be active for the final quarter of the current fiscal year, and June receipts typically not being received until July, it is unclear how much additional revenue the County could expect to be added to the current budget – which is reported to be more than $300,000 in arrears.

The letter also outlines the new Business Permit and Fee, slated to take effect on July 1.

According to the ordinance anyone operating a business or working in the county is required to obtain and display a license in their place of business or work or face fines and penalties. The cost for most businesses is $20.

A license for temporary, or itinerant businesses, such as those setting up to sell wares on the roadsides is available for a $50 fee.

County officials state the business license is geared not to be a burden on business owners, but rather a tool for the Occupational Tax Office to better track and identify businesses operating in the County and to ensure they are paying their share of the wages and profits tax.

The ordinance states that yard sales are not banned by the law; but it does stipulate such sales must be held on personally owned property, or with the written permission of the property owner. Also yard sales occurring more than three times per month will be required to obtain a permit.

The McCreary County Sheriff’s Department, Constables and the Occupational Tax Office will be tasked with enforcing the ordinance. A $50 fine has been established if a business is found to not be displaying the proper license. That fee will be turned over to the law enforcement agency performing the inspection.