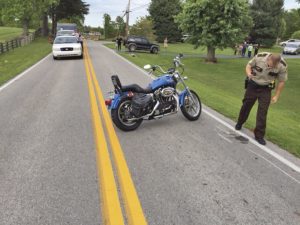 A Pine Knot man was seriously injured after a motorcycle crash on Bethel Road Monday evening.

The single vehicle accident occurred around 6:00 p.m., about 1.8 miles from the intersection of KY 90.

According to the McCreary County Sheriff’s Department, witnesses stated the victim, identified as Dwight King, was traveling northbound on the roadway when he apparently failed to negotiate a curve, causing his bike to leave the roadway and turn on to its side. The bike and rider slid on the road nearly 200 feet before coming to a rest.

King was seriously injured in the accident and was airlifted to the University of Tennessee Medical Center for treatment of his injuries.

Members of the Pine Knot Fire Department and McCreary County EMS assisted at the scene.