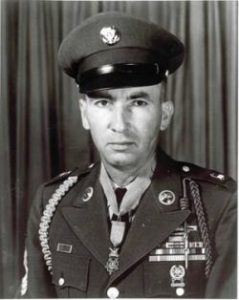 Born in Strunk in 1922, Ross joined the United States Army at age 20 and through his heroic actions during the war was awarded one of the Nation’s highest recognitions – the Medal of Honor.

Just a few days shy of his 95th birthday Ross was one of five living Medal of Honor recipients from World War II and was further honored with a 2013 issue of a postage stamp commemorating his selfless actions on a fateful October day in 1944.

While much has been written about Private Ross’ actions in France, perhaps the most eloquent is the official narrative from his Medal of Honor citation:

“For conspicuous gallantry and intrepidity at risk of life above and beyond the call of duty near St. Jacques, France. At 11:30 a.m. on 30 October 1944, after his company had lost 55 out of 88 men in an attack on an entrenched, full-strength German company of elite mountain troops, Pvt. Ross placed his light machinegun 10 yards in advance of the foremost supporting riflemen in order to absorb the initial impact of an enemy counterattack. With machinegun and small-arms fire striking the earth near him, he fired with deadly effect on the assaulting force and repelled it. Despite the hail of automatic fire and the explosion of rifle grenades within a stone’s throw of his position, he continued to man his machinegun alone, holding off 6 more German attacks. When the eighth assault was launched, most of his supporting riflemen were out of ammunition. They took positions in echelon behind Pvt. Ross and crawled up, during the attack, to extract a few rounds of ammunition from his machinegun ammunition belt. Pvt. Ross fought on virtually without assistance and, despite the fact that enemy grenadiers crawled to within 4 yards of his position in an effort to kill him with handgrenades, he again directed accurate and deadly fire on the hostile force and hurled it back. After expending his last rounds, Pvt. Ross was advised to withdraw to the company command post, together with 8 surviving riflemen, but, as more ammunition was expected, he declined to do so. The Germans launched their last all-out attack, converging their fire on Pvt. Ross in a desperate attempt to destroy the machinegun, which stood between them and a decisive breakthrough. As his supporting riflemen fixed bayonets for a last-ditch stand, fresh ammunition arrived and was brought to Pvt. Ross just as the advance assault elements were about to swarm over his position. He opened murderous fire on the oncoming enemy; killed 40 and wounded 10 of the attacking force; broke the assault single-handedly, and forced the Germans to withdraw. Having killed or wounded at least 58 Germans in more than 5 hours of continuous combat and saved the remnants of his company from destruction, Pvt. Ross remained at his post that night and the following day for a total of 36 hours. His actions throughout this engagement were an inspiration to his comrades and maintained the high traditions of the military service.”

Following his heroic deeds Ross continued to serve his country, re-enlisting to see action in Korea, and served another 20 years.

After retiring from active duty with the rank of Master Sergeant in 1964, Ross lived in DuPont, Washington, where he married and raised six children.

Ross’ nephew, Tilden, said his uncle always loved his home county, and tried to visit as often as he could, especially on his birthday.

“He was a great guy and a super good dad and uncle,” Tilden said. “He would take time out for anyone.”

Tilden said Ross was never shy to talk about his military experiences, but never wanted to portray himself as above any of his fellow soldiers.

“He would say a lot of men and women were killed during the war and didn’t want the spotlight on him alone,” he said.

Ross had reportedly turned down offers to turn his story into a Hollywood movie.

“He was a hero and an inspiration for a lot of people. He did a great service for McCreary County and the United States of America.”

Ross is memorialized in his home county with a portion of Kentucky 92 named in his honor.

Funeral arrangements and other possible memorials were still pending as of press time.