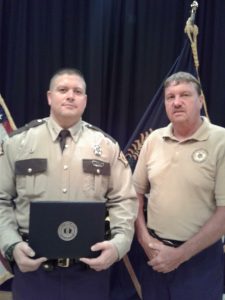 The McCreary County Sheriff’s Department has a new, Academy-trained Deputy on the roster.
Deputy Greg Chaney graduated last Thursday from the Kentucky Department of Criminal Justice Training after completing a 23-week, 923 hour instructional course, where he received training in homeland security, law offenses and procedures, vehicle operations, firearms, investigations, first aid and CPR, patrol procedures, orientation for new law enforcement families and the mechanics of arrest, restraint and control.
One of 32 graduates of class 482, Chaney will now rejoin the Sheriff’s Department where he will resume duties patrolling and protecting.

Chaney has a long history of working in the emergency services field. Over the years he has served as an EMT, Transport Officer, firefighter and as an Assistant Director with McCreary County 911. He joined the McCreary County Sheriff’s Department two years ago, first as a volunteer, before becoming full time last August.

“I want to thank my family (wife Lisa and son Zack) for their support during my training and Sheriff Waters for trusting and believing in me enough to send me to the Academy.”

Sheriff Waters said Chaney’s Academy training will be an asset to his department.

“I am very proud of Deputy Chaney for his dedication and commitment to help this department and the citizens of McCreary County,” Sheriff Randy Waters said.

“Having another Academy trained Deputy on the force will allow us to better conduct investigations and protect the people of our community.”

Sheriff Waters noted Deputy Dustin Ridner is currently enrolled in the Academy, and expects to graduate in October.