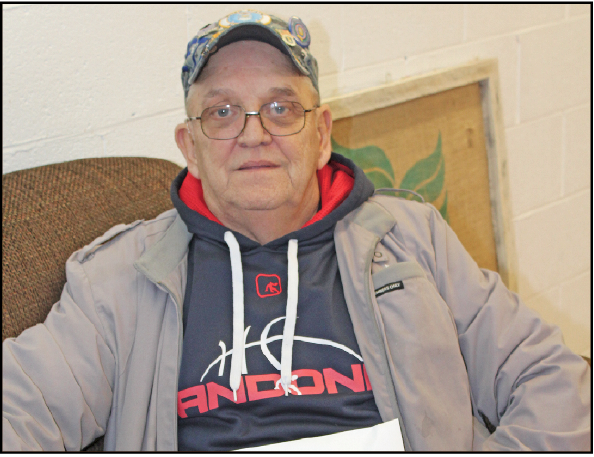 Photo by Eugenia Jones In his battle against drugs Roger Owens is responsible for many of the drug prevention activities currently in place in the school system.

Those are the words of one man who has made it part of his life’s mission to try and help those who need it most.

Roger Owens, who for the past 14 years has been a driving force behind initiatives such as Champions for a Drug Free McCreary County is an advocate in the Court system and a strong believer in getting people with drug-dependency issues in to a rehab program.

Through Champions, and other agencies such as UNITE and Adanta, Owens works with families to find a suitable rehab or drug treatment facility for them to get clean.

He certainly has first-hand knowledge of the issue. He and his wife Tamara have opened their home to several foster children over the years, with a majority of the children they cared for coming from homes that have been impacted by drugs.

“We have fostered over 50 children in an 8-year period. About 80 percent of them are drug related,” he said.

“It is heartbreaking to see these kids taken from their families because of drugs.”

While a lot of Owens’ work centers around getting people the help they need, making sure the children of this community never get started with drugs in the first place is a major priority in his life.

Owens says a big part in preventing drug abuse is providing a healthy alternative for kids.
My philosophy is education and prevention,” he said. “If we can show the young people the effects of those bad decisions, and teach them healthy alternatives, hopefully when they get older they don’t fall in to the same trap.”

Through programs such as archery, and the First Tee imitative, which provides golf equipment and teaches kids the sport, Owens says one of the means of prevention is giving kids something to do.

“The new additions at the park, like the basketball courts, and after school programs like at the Lord’s Gym have been wonderful,” he said. “It is a much more healthy and safer environment for them.”

“We need more programs that gives kids something to do after school and over the summer.”

Owens’ groups also have a program to provide drug testing kits to parents who may suspect their child is on drugs.

Owens knows a lot about rehab programs, and says the biggest factor in effective treatments is the patients themselves – they need to want to get help.

Sometimes they don’t take it seriously, and are in danger of finding themselves back on the same path that tangled them up before.

“Probably a large percentage of them are going to rehab as an alternative to jail in the court system,” Owens said. “If they complete it, they can come back before the Judge and their sentence will probably be probated.”

The problem, he said, is that those types of rehabs are voluntary. At any time the individual can just “walk-out.” If they do, they face repercussions from the Courts, but often times they don’t think about that at the time.

“Most rehabs don’t allow cigarettes,” Owens said. “Some of them, once they find out they can’t smoke, decide it isn’t worth it, and ask to leave.”

The most effective treatment, Owens believes, is the Drug Court – a special program from the Kentucky Administrative Office of Courts. The program is designed to assist individuals who have entered the criminal justice system as a result of drug use or drug-related criminal activity and are choosing to achieve and maintain recovery. Drug Court combines close court supervision and treatment with other services to intervene and break the cycle of substance abuse, addiction and crime.

“It is a very difficult program,” Owens said. “It can take up to 18 months to complete. They are drug tested every week, and part of the program is to find a job.”

“But, it is also very successful,” he added. “It has a graduation rate of more than 80 percent. Those that do complete it are better for doing it.”

There are a lot of choices for other rehab facilities that serve this area. Owens readily provides a list of facilities in and around Kentucky that provide both short and long term treatment.

Most of them are contracted through UNITE, and even those that are not do work with local programs to provide help.

“These centers are great,” Owens says. “While the main focus is ending drug dependency, a lot of them offer additional help, such as parenting, job seeking and family counseling. They have a lot to offer.”

While a majority of the centers accept private insurance, Owens said he can help families without insurance by arranging vouchers from government programs to help pay for treatment.

“There is help out there,” he said. “If a family or individual needs that help, they can contact me directly and I will do what I can.”

One of the biggest risks for people who have had a drug problem is completing a program then returning back to where the problem originated.

“I tell them, if it is at all possible to leave McCreary County. If you want to be clean, you have to leave the old influences behind,” he said.

“They typically have a lot of excuses for not wanting to try and find a new life somewhere else. They usually say that there are drugs everywhere, so why should they leave?”

“I tell them that is true, but the drug dealers don’t know you, and you don’t know them.”

“They have to get away from the easy path, or else they are likely to get caught up in the same trap again.”