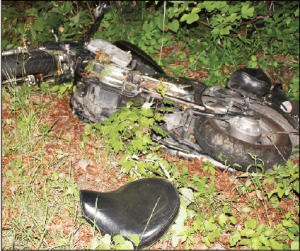 A Wayne County man died Tuesday night after crashing his motorcycle on West Highway 92.
The accident occurred shortly after 9:00 p.m. A passing motorist spotted an overturned motorcycle alongside the roadway with the headlight still on. Emergency personnel were dispatched and the body was located a short distance from the crashed bike.
McCreary County Coroner Tim Corder pronounced Gary T. Bell, 59, of Monticello dead at the scene of the crash, about three miles from the Wayne County line.
Bell was traveling westbound when his cycle apparently left the roadway and crashed. Bell likely died from blunt force trauma to the head, Corder said.
Assisting at the scene were McCreary County Sheriff Randy Waters, Deputies Milford Creekmore and Alex Jones, members of the West McCreary and Whitley City Fire Departments and McCreary County EMS.