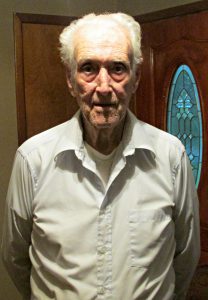 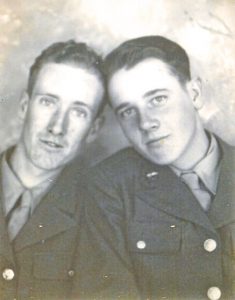 When mentioning the sacrifice of American soldiers it is always with admiration, but it isn’t always known what those sacrifices are. It is hard to imagine something if one hasn’t experienced it. It is even harder to imagine that feeling of sacrifice. 93 year-old, World War II veteran, Field Sergeant Ottis Kidd knows sacrifice from his time overseas. Kidd enlisted with the U.S. military at the age of 17 in 1942 and it was this decision that changed his life.

“We were in France, but we were heading for Germany across the mountains,” says Kidd, “We went up on this high mountain and had the idea that we were going to cross it instead of going around it. We got close to the top and got snowed out. So we had to stay up there overnight. This big tree had blown over and that’s where we spent the night, down in the hole where that tree stood.”

Kidd recounts those harsh conditions vividly because it was that moment that would forever impact his life.

“They thought I wasn’t going to make it and they took one of my dog tags. It was cold and it was snowing.  We had a field jacket that was waterproof, but from my waist down I actually had ice on my legs. We had to spend the night like that. A couple days later my ankles and my knees swelled up. I couldn’t walk. They got me to an aid station and it turned out I had rheumatic fever. It affected a valve in my heart and they had to send me home. I had to take an early discharge. I wanted to stay in and eventually retire, but I was unable to perform my duties,” Kidd smiles to himself, “I’m glad that I didn’t stay to retire though because if I had I wouldn’t have met my wife.”

Kidd met his wife, Geneva, at the Fourth of July carnival held in Stearns, KY by the Big South Fork train station in 1946. A year later, on May 12, the two married and remained so for over 69 years before Geneva passed away last May. Kidd remembers that the doctors did not expect him to live past the age of 45 with his heart condition, but he believes that it was his wife who kept him going all of these years.
Although he had been sent home, Kidd continued to think about his brethren soldiers whom he had spent so much time with. He did what he could to keep up with where they were, but he was not prepared for the news that was brought to him.

“The men I had been with in France landed on Normandy Beach, but before they had made it 75 feet from the shore the Germans had opened fire on them,” Kidd recalls, “Most of them were washed out to sea and their dog tags were never collected. They won’t pronounce them dead unless the dog tags are collected. They are still considered missing in action today,” he sighs and shakes his head, “It’s not fair.”

When asked about what was the hardest thing for him while overseas, Kidd thinks back, “I was in the military hospital. It was made up of a bunch of tents. Eventually I was moved to a ward and there was about two men to a room and then all the way down both sides of the hallways were cots. That’s where I was. When I woke up a nurse came up to me. She said, ‘I’m gonna have to stop doing the things I’ve been doing to you,’ and I said, ‘What have you been doing to me,’” Kidd laughs, “She had been turning me over onto my belly to massage the muscles in my back. I told her she could still do that,” Kidd grows stoic, “After I had been home for a while I came to find out that the Germans had bombed the hospital tents with her and 21 wounded soldiers in them. She was from Portland, OR. When you went over there you didn’t know if you were coming back or not. A lot of them didn’t.”