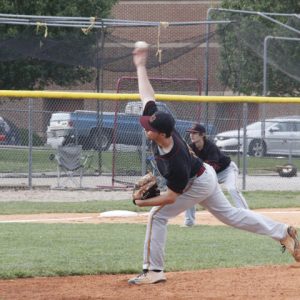 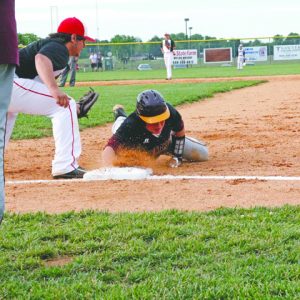 Photo by Greg Bird Zech Moore gets a face full of dirt as he slides back in to first base to avoid a pick off. 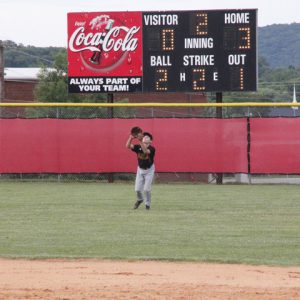 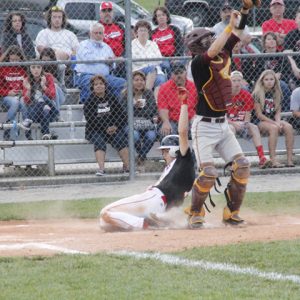 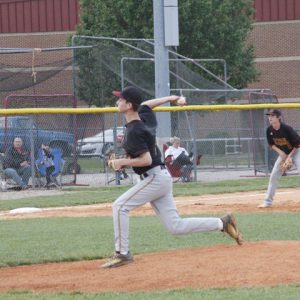 Wayne County got some timely hits, while McCreary Central committed some costly errors, leading to a 10-2 Cardinal win and ending the Raiders’ season Monday night in the 48th District Tournament opening game.
The Cardinals struck early, scoring twice in the first inning and four in the second to put McCreary in a hole they couldn’t climb out of.
The Raiders did have their share of opportunities, getting runners in to scoring position in all but one of the 7 innings, but only managed to scrape together two runs off five hits.

Justin Trammell, the Raiders’ ace pitcher took the start Monday night, but got hit hard, and five errors in the first three innings did little to help the hurler out of trouble.
Trammell allowed 8 hits over 2 and two-thirds innings, giving up 10 runs, but only 6 earned. Freshman Connor Campbell came on in relief in the third inning, shutting down the Cardinals and giving his team a chance for a comeback. Campbell allowed only one hit while striking out 6 batters.

In the bottom of the first inning Trammell struck out the first batter he faced, but next gave up a single and a walk, putting runners on first and second. An errant throw on a pick off play proved costly as both runners advanced and would later score on a base-hit from Braden Dobbs for a 2-0 Wayne County lead.
The Raiders tried to get on the board in the top of the second after Trammell drew a lead-off walk, but Wayne County managed to retire the next three batters to escape the inning.
The Cardinals struck again in the second, a lead off single led to a run, but it looked like the Raiders would be able to get out of the inning without any further damage. With a runner on second and two outs, Avery Perkins hit an infield grounder that could have been the final out, but the throw got away, allowing the runner to score and the inning to continue. Following another single and a stolen base the Cardinals had runners on second and third when another McCreary fielding error allowed both to cross the plate for a 6-0 Wayne County lead.
The Raiders’ rallied a little in their half of the third, getting three consecutive 2-out hits that led to their first run of the game. Blake Corder’s double down the right-field line started things off, followed by a Nathan Goins base-hit to left – scoring Corder. Evan Kidd would single to right, putting runners on the corners, but the rally would end there.
The Cardinals batted around in the bottom of the third, scoring 4 runs off four hits and a walk for a 10-1 lead, and ending Trammell’s night on the mound. Campbell came in with two outs and gave up a double and a walk, but got the Raiders out of the inning without any further damage.
Campbell would pitch the remainder of the game, allowing only two additional Wayne County baserunners on a walk and hit batter, but did not allow any runs.
McCreary scored again in the top of the fifth after Grant Hamner led off the frame getting hit by a pitch. He would advance to third on a Corder single, and score of a Goins sacrifice fly to cut the Cardinals’ lead to 10-2.
The Raiders would get runners on first and second in both the sixth and seventh innings, but were unable to advance them any further, ending their season.

McCreary finished 2017 with a record of 8-19.
Wayne County was scheduled to play Southwestern last night (after press deadline) for the 48th District Championship.
Both Wayne County and Southwestern will continue on in the 12th Region Tournament next week.