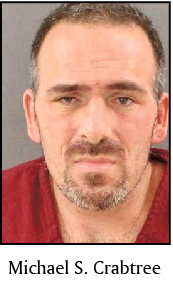 A Somerset man is facing manslaughter charges after a Saturday afternoon accident that left a Stearns man dead. Drug use is considered a factor in the crash.
According to the Kentucky State Police, Michael S. Crabtree, 37, was charged with manslaughter 2nd after striking and killing Jimmy D. Daugherty, 55, around 3:30 p.m. Saturday.
Trooper Donnie Jones determined Crabtree was traveling northbound on US 27 in a 2008 Chevrolet Cobalt when he crossed the center line and struck Daugherty, who was riding a Honda motorcycle, head-on. The cycle went on to strike a third vehicle, driven by Robert B. Jones, 36, of London.
Daugherty, who was wearing a helmet, was pronounced dead at the scene by McCreary County Coroner Tim Corder.
Crabtree was airlifted to the University of Tennessee Medical Center for treatment of his injuries. He was arrested upon his release and lodged in the Knox County Detention Center in Knoxville.
According to Kentucky revised Statutes, manslaughter 2nd is considered a Class C felony and can carry a sentence of 5 to 10 years.
Trooper Jones is continuing the investigation. He was assisted at the scene by Troopers from KSP Post 11, the McCreary County Sheriff’s Office, McCreary County Coroner’s Office, Pine Knot Fire Department and Whitley City Fire Department.
This is the fourth traffic-related fatality in McCreary County in the past three weeks.