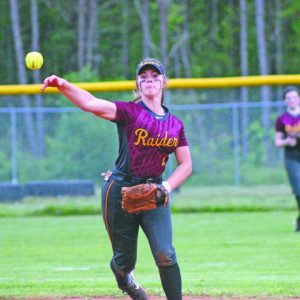 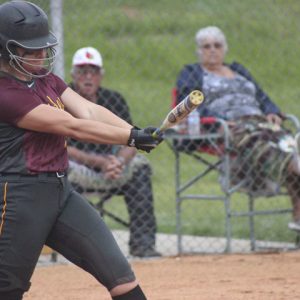 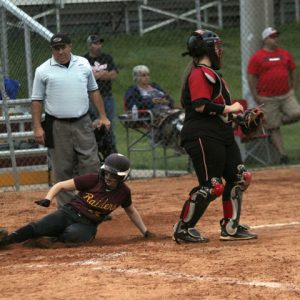 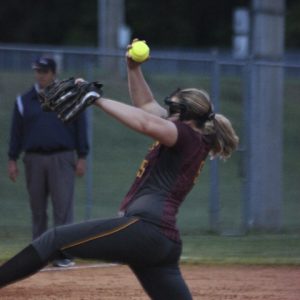 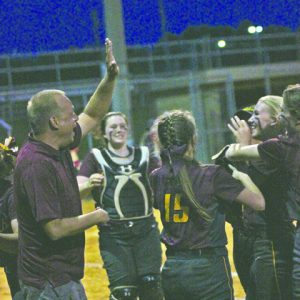 Photo by Chris Hollis The Lady Raiders celebrate the win after knocking off Wayne County Monday night in the District Tournament. The win automatically advances them to the Regional Tournament.

A 7-run second inning propelled the McCreary Central Lady Raiders’ Softball team to an exciting 9-7 win over Wayne County in the opening game of the 48th District Tournament – keeping McCreary’s season alive and guaranteeing them a spot in the 12th Region Tournament next week.
After starting the season 0-12 the Lady Raiders have certainly hit their stride over the last two weeks, winning 6 of their last 9 and scoring a lot of runs in the process. Over the course of their six wins McCreary has scored 85 runs, compared to just 29 in their previous 12. Coach Todd Waters said injuries hampered the early season, but now everyone is healthy and playing at their peak.
In their first two meetings Wayne County had knocked off McCreary in the regular season, and the game started on an ominous note with Wayne County stricking first, scoring a run in the bottom of the first on a Taylor Bell double and a RBI single from Alizabeth Coffey, but Welchel struck out the next batter to end the inning with McCreary trailing 1-0.
The Lady Raiders answered in a big way in the top of the 2nd, sending 13 batters to the plate in a 5-hit, 7-run attack.
After a fly-out to start the inning the next 7 batters reached safely to start the rally. Singles from Taylor Sumner and Grace Jones and a walk from Sierra Whalen loaded the bases for Abbey Perry who singled in the first run. A walk to Celya Kiser drove in another, followed by back-to-back Wayne County errors for a 4-1 McCreary lead. A 2-out single to left from Welchel drove in Kiser and Ally Anderson and a bases-loaded walk to Jones scored the final run of the frame with the Lady Raiders holding a 7-1 lead.
Wayne would keep chipping away at the McCreary lead, adding solo runs in the 2nd and 4th, plus two in the 5th to cut the Lady Raiders’ lead down to 2 runs.
McCreary held the 7-5 lead until the 6th, when they scored a pair of runs that would prove to be valuable insurance runs.
Emily Simpson would reach on an error followed by a Cammie Gilreath single. Both runners would cross the plate on a 2-out Sumner single to center for a 9-5 advantage.
Those runs proved crucial for McCreary as Wayne County threatened to steal the game away in their last at-bat in the bottom of the 7th inning.
A lead-off single from Casi Bell put the first two runners on base. Hannah Jackson struck out for the first out of the inning, but Alex Preat drove in Bell from second for a run. Haleigh Criswell popped out, putting McCreary one-out away from the win. A walk to Deshea New loaded the bases for Wayne County’s most dangerous hitter- Taylor Bell. Bell had already reached base four times in the game, including a solo home run in the fifth, so rather than take a chance on allowing her to win the game with one swing, McCreary opted the unconventional strategy of intentionally walking her – driving in another run, but taking the bat out of her hands.
The gambit worked as Coffey followed with an infield ground-out – ending the game and sending McCreary to the championship round of the tournament.
The Lady Raiders were scheduled to play Southwestern last night (weather permitting) in the Championship game of the 48th District Tournament. Both teams will advance to the 12th Region Tournament at Garrard County next week.

The return to Region is the Lady Raiders’ first since 2015, and their 5th appearance in the past 6 seasons.