During Memorial Day  ceremonies hosted by posts of the local VFW and American Legion,  McCreary Countians paid tribute to the many American veterans who have lost their lives through military service to their country.  Recognizing those who have made the ultimate sacrifice in defense of freedom and the sacrifices of their families and loved ones, a reoccurring  theme of “no greater love than this” from John 15:13 emerged throughout the day.  The local ceremonies also spotlighted the bravery of McCreary native and Congressional Medal of Honor recipient Wilburn  Ross, recently deceased, and World War II Purple Heart recipient, James Baker.  The Ross family received the U.S. flag retired during a Courthouse ceremony as Baker, later in the day during a ceremony at the American Legion, spoke eloquently of his experiences during WW II. 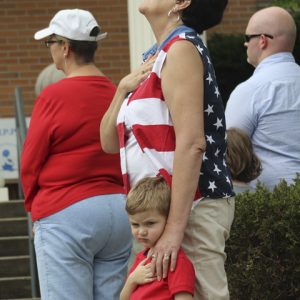 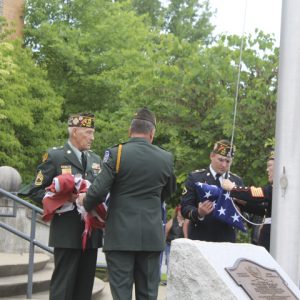 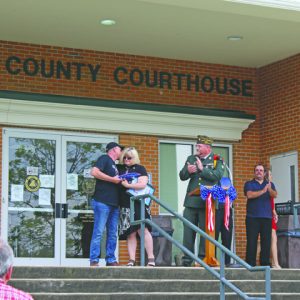 Acting on behalf of the Wilburn Ross family, Ross’s nephew and niece, Shawn Ross and Sharon Privett, accept the flag presented to them.

Photos by Eugenia Jones The surviving brothers of Wilburn Ross were present during a Memorial Day ceremony at the McCreary County Courthouse. Pictured left to right are Ruben, Charles, Logan, and Burdell Ross. 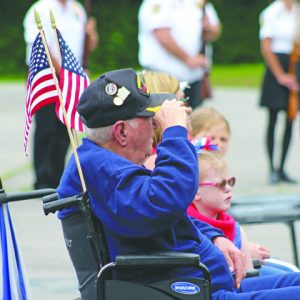 Patriotism and love of country are attributes passed throughout the generations as was witnessed during a Memorial Day ceremony where WWII veteran and Purple Heart recipient James Baker sat next to a young girl dressed in her prettiest red, white, and blue.