Five individuals were indicted by the McCreary County Grand Jury this month with charges ranging from child pornography to drugs. 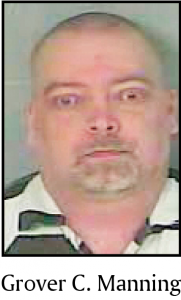 Grover Manning, of Pine Knot, was indicted on 13 counts of Possession of Matter Portraying a Sexual Performance by a Minor for allegedly possessing matter visually depicting a sexual performance by a minor.
Manning was first arrested in April following an undercover Internet Crimes Against Children investigation. The investigation was initiated after it was discovered he had allegedly been sharing images of child sexual exploitation online.
Each charge is considered a Class-D felony, which could carry a one to five year sentence for each count.

Ashley Martin, A.K.A. Perkins, of Stunk, was indicted on a count of Trafficking in a Controlled Substance and one count of Possession of Drug paraphernalia for reportedly being found with over 2 grams of methamphetamine and items commonly used for the ingestion and/or distribution of illegal substances on April 5.
Martin was also indicted as a Persistent Felony Offender after a 2010 conviction for Promoting Contraband.

Ronnie Hicks, of Whitley City, was charged with Tampering with Physical Evidence, Possession of a Controlled Substance and Possession of Drug Paraphernalia for allegedly having a quantity of methamphetamine and items commonly used for the ingestion and/or distribution of illegal substances, as well as attempting to destroy evidence on February 12.

Brandon T. Stephens, of Strunk, was Charged with Fleeing or Evading Police, Operating a Motor Vehicle While Under the Influence of Intoxicants and Burglary. According to the indictment Stephens allegedly unlawfully entered a residence with the intent to commit a crime on April 5, and knowingly failed to obey signals of Trooper Craig Reed to stop his vehicle, while driving while under the influence.
Stephens was also charged with being a Persistent Felony Offender after previous convictions in 2009 and 2015.

Tommy Daniels, of Monticello, was charged with Flagrant Non-Support for reportedly failing to make Court-ordered child support payments for at least six months, with an arrearage of over $1,000.

The Voice would like to remind our readers that an indictment is not an indication of one’s guilt or innocence, but represents that enough evidence exists in a case to pursue the matter in a court of law.