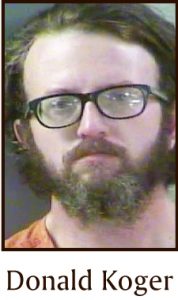 Donald A. Koger, of Pine Knot, was indicted by a Federal Grand Jury last week on charges he created and distributed child pornography.
Koger was arrested on a Federal warrant Friday and taken in to custody at the Laurel County Detention Center by KSP Trooper Craig Reed.
According to the indictment filed in the U.S. District Court in London the 35-year old allegedly “did attempt to knowingly use a minor to engage in sexually explicit conduct for the purpose of producing any visual depiction of such conduct, and the visual depiction was produced or transmitted using materials that have been mailed, shipped or transported in or affecting interstate or foreign commerce” on five occasions between November 16, 2013 and October 2, 2013 in Pulaski County.
A sixth charge alleges Koger knowingly possessed at least one video file depicting the use of a minor in sexually explicit conduct in McCreary County on April 13 of this year.
Koger pled not guilty to the charges in his arraignment in U.S. Eastern District Court Monday, and is scheduled to face a jury trial on August 8 before Judge Gregory F. Van Tatenhove.
Potential penalties for the first five charges could include a jail sentence of between 15 to 30 years, with 5 years supervised release and a fine of not more than $250,000. The sixth count could carry a sentence of up to 10 years imprisonment and up to $250,000 in fines.
The Voice would like to remind our readers that an indictment is not an indication of one’s guilt or innocence, but represents that enough evidence exists in a case to pursue the matter in a court of law.