Less than a month after the McCreary County Board of Education voted to impose a nickel tax, a group of five citizens have turned in more than 900 signatures on a petition calling for a public vote on the future of the tax. 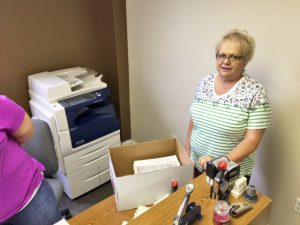 Billy Morgan, Harold Campbell, Debbie Campbell and Vicki Kidd, members of the tax recall committee, turned in more than 900 signatures asking for the proposed nickel tax be put on a public ballot. 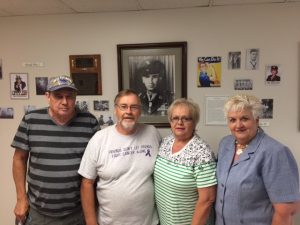 Debbie Campbell, one of the members of the group, said support for the recall election has been relatively positive, with only small pockets of resistance hampering their efforts.

“The outpouring has been unreal,” Campbell said Monday after turning in 953 petitions calling for the recall. “It has been very humbling to listen to some of the people who told us how they struggle to make ends meet without the burden of more taxes.”

Needing only about 600 signatures to support the recall vote, the group worked to ensure there were more than enough names submitted in case some were disallowed. The committee did check local voting rolls against their petitioners as a precaution prior to turning them in and claimed they believed all signatures were valid and would withstand any challenge.

Campbell, along with Vicki Kidd, Harold Campbell, William D. Hale Jr., and Billy Wayne Morgan formed the committee last month and began the process of circulating the petition, seeking legal help along the way to ensure it was done properly and to the letter of the law.

The main reason behind the petition, the group said, was to put the decision of the tax in the hands of the voters.

“We want to give the citizens the right to vote for or against it instead of just five Board members,” Campbell said.

Kidd said she knew there were a lot of people in the County upset over the possibility of the tax, and felt someone had to step up and start the process.

“We are just five citizens who stood up and did what the people wanted,” she said.

“We did this for every citizen of this county to have the opportunity to vote yes or no.”
Another reason for leading the fight against the tax is simple economics Campbell said.

“Every little dime hurts people,” she said. “We are taxed too much.”

Campbell cites the recent increase in Occupational Tax by the McCreary County Fiscal Court as another recent burden on the people of this county as an example of taxes hurting citizens in a struggling economy.

“It is just the wrong time to ask our people to pay more taxes,” she said. “There may come another time where it may be different, but not now.”

Campbell said the group has worked hard these past weeks since filing their intent to circulate the petition by visiting hundreds of households and talking to people.
She said there was some reluctance by some who she claims felt afraid to put their name on the petition.

“We spoke with people who were employed by the School District or had relatives who worked there who were afraid to sign for fear of retaliation,” she said. “But even people who wouldn’t sign said they would vote against the tax when it came time.”

County Clerk Eric Haynes said he hoped the verification process would be completed by the end of this week.

If enough signatures are verified, the task will be on Judge Executive Doug Stephens to call for a special election – putting the question to the public for a vote.

The law requires the election to be called between 60 and 90 days of the certified petition, putting the date of the possible election some time in August.

The McCreary County Board of Education would have to bear the cost of hosting the special election, about $20,000, or could vote to postpone the tax vote until the General Election in November of 2018.

The Lawrence County School District recently voted to defer the vote on their proposed tax until the next General Election after a successful petition drive in that county.

The Board will also have the option of voting to rescind the tax before the public vote is held. If they choose to do so, the tax rate will automatically revert to a four percent increase, but the District would lose out on any potential equalization funding from the state.

Other school districts have had varying degrees of success with their recent nickel tax proposals.

Last Friday the Critenden County School District voted to impose a nickel tax, and a committee has already begun circulating a petition to recall it. A similar petition drive is underway in Daviess County.

While in Newport, a nickel tax passed in January will remain in place after a petition drive failed to generate enough signatures.