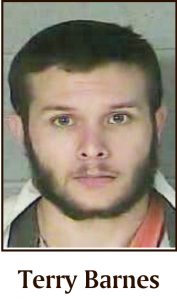 Sheriff Waters stated he received information regarding a subject in the area possibly attempting to buy and sell drugs. After receiving a description of the vehicle the suspect was reportedly driving, Deputy Derek Dennis spotted the subject traveling north on US 27 in Pine Knot around 4:39 p.m.
The subject, identified as Terry Barnes, 24, of Huntsville, pulled into the parking lot of a local service station. Deputy Dennis stated Barnes spotted the Deputy pulling in behind him and exited his vehicle very quickly and headed for the store.
The Deputy stopped the subject and noticed several small baggies in his shirt pocket. Barnes reportedly refused to comply, with the Deputy’s orders to place his hands behind his back several times. The subject acted nervous and continued to resist officer’s orders. After several orders to comply and with Barnes attempting to pull away from Deputy Dennis, a taser was eventually deployed twice before officers were able to handcuff Barnes and place him under arrest.
Once Barnes was securely in custody, a search of his person found two baggies containing approximately four grams of suspected methamphetamine, along with several other baggies commonly used for the packaging of illegal drugs.
Barnes told the officer he was planning on selling the meth to a local person, but refused to give the name of the buyer.
The suspect also confessed he had used meth earlier that day and failed a field sobriety test at the scene.
U.S. Forest Service Officer Tim Grooms and his K9 agent arrived on scene to assist with the search of the vehicle. The dog alerted to the presence of drugs in the doors and seats of the vehicle, but an initial search failed to locate any narcotics. The vehicle was impounded and a search warrant for a more detailed search was expected to be obtained.
Barnes faces several charges as a result of the incident.
He was charged with operating a motor vehicle under the influence, trafficking in a controlled substance, deliver/manufacture of drug paraphernalia, resisting arrest, disorderly conduct and traffic-related offenses.
He was lodged in the Leslie County Detention Center awaiting arraignment.
Sheriff Waters stated he has opened an investigation into the reported trafficking in hopes of identifying additional suspects in the case. Additional charges may be pending as a result.