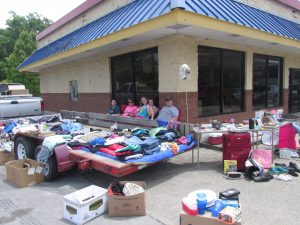 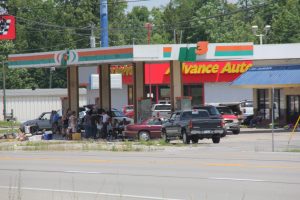 Starting July 1 the new McCreary County Business License ordinance will be put into effect, requiring all businesses to obtain a license to operate in the County. A regular business will pay an annual fee of $20 for the license.  Temporary or itinerant businesses, such as those who set up to sell pallet goods in flea markets will have to pay an annual fee of $50 to obtain their license. To most this doesn’t mean much, but not many realize that the new ordinance categorizes a yard sale as a temporary business.

Once the ordinance is in effect any yard sale on public property must have a temporary business license in order to legally sell goods. This will be mostly impactful to anyone who sets up at the old M3 gas station in Whitley City being that it is one of the most popular spots for anyone looking to sell and some of the vendors aren’t aware that this is happening.

“Oh, no,” says Natasha Perry when told about the ordinance, “I don’t like that at all. I work for the branch of Somerset Community College here in the county, so when school lets out this is really the only way for us to make a little extra money. We can’t set up a yard sale at our home and we don’t know anyone who would let us do that either, so this is really it. We aren’t the only ones, a lot of people use this as a means for extra money for school clothes or something else.”

The ordinance also highlights that citizens can’t hold a yard sale on private property for more than three days out of a month without owning one of the aforementioned business licenses or having written permission from the business owner.

“I have neighbors who sell furniture out of their homes and call it a yard sale,” says Jeanine Burke, a casual yard seller, “but it’s not fair to those who are actually out here trying to have a real yard sale. I understand why the county is doing it, but they know who those people are. The ordinance isn’t going to help because everyone who has been making their yard sale a business will just sell online, like with Terrific Traders, while it hurts everyone else who just wants a little extra money.”

Burke continued by saying that although the ordinance was upsetting it did not impact her as much as it would impact others. For Burke a yard sale just means making extra money on some old stuff, but for others it is a lot more.

Nathan Perry Jr., a regular seller at the M3 station, said, “I don’t think it is right to do poor people that way because this is mainly for the people who don’t have much. There are people having a hard time in this county who need this and it is like they are taking it away from them.”

Mr. Perry had heard of the ordinance, but was not fully aware of what it entailed. When told about the price he was shocked.

“There are people who can’t pay that,” Perry says, “This isn’t a business. They need to consider the poor people in this county who are barely making it. I believe there are so many people who turn to selling drugs because they feel they have no other choice. I don’t believe in selling drugs, but I am on a low income and it is hard for me to make it month to month. Yard selling is how I help with that.”

Most everyone within the yard sale community had a similar opinion on what the new ordinance would mean for them and for other sellers. Burke, who was happy to share her opinion, asked if it would really make a difference.

A lot of the effects of the ordinance remains to be seen. Enforcement will be a large issue for the county to deal with. Right now, the task of policing the ordinance falls to the local Sheriff’s Office and Occupational Tax Administrator.

To be effective, enforcement also has to be fair. The question will be who will get a citation for selling without a license and who will not.