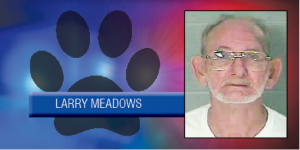 Larry J. Meadows, 71, was initially charged with torture of a dog/cat with serious injury or death, a misdemeanor, but the charge was later upgraded to felony status after the animal passed away as a result of the injuries sustained in the alleged beating.

The charge is considered a Class D Felony and can carry a sentence of one to five years if convicted.

A witness to the reported attack, Meadow’s neighbor Jimmy Garza, stated he saw Meadows repeatedly striking the dog with a mop handle or stick. Garza and his wife, Marilyn intervened to stop the attack. According to the witness, the suspect reportedly said he was teaching the dog a lesson for digging a hole in his yard.

McCreary County Animal Control was contacted and the female border collie was taken to Knox/Whitley Animal Shelter in Corbin for initial medical care. With the dog experiencing seizures and in distress, the dog was sedated and transported via Mobile Mutts with a vet tech on board to Louisville’s Blue Pearl Veterinary Hospital for emergency medical care. Despite the rescue efforts, the dog passed away the following day.

The Arrow Fund, a Kentuckiana based 501 (c)(3) nonprofit organization that provides medical treatment to animals who have been victims of extreme torture, abuse, or neglect, provided the emergency transportation and care of the dog, named Mira after her rescue. Representatives from the Arrow Fund also claim the dog had been poisoned with antifreeze as well.

Meadows was booked at the Leslie County Detention Center at 3:57 a.m. Saturday. According to the arrest citation, Meadows stated he did not hit the dog, just that he threw a mop handle at it.  Just prior to leaving his residence he asked, “How is it a felony to hit a dog?”

He was released on bond Monday and had an arraignment hearing scheduled for McCreary County District Court on Thursday.

The case has garnered attention from across the country as animal welfare groups have condemned the reported actions and several petitions have been circulated calling for justice.

Readers are reminded that the Meadows is considered innocent until proven guilty in a Court of Law.