A new street drug, dubbed “grey death,” has been making news across the south lately as overdoses and deaths follow closely in its wake.

Grey Death, shown here in a common form, is potentially deadly to those who even touch the substance.

A new street drug, dubbed “grey death,” has been making news across the south lately as overdoses and deaths follow closely in its wake.

Though no cases of the exotic mix of opiods have been reported in McCreary County as of yet, emergency personnel are aware of the dangers of this drug concoction and are taking steps to protect themselves in the instance they come across it.

Alone, those drugs pose their own risks, but when combined into “grey death” the dangers grow exponentially.

Users of grey death have been known to inject, swallow, snort and smoke the substance. The Gulf Coast High Intensity Drug Trafficking area released a bulletin that revealed two confirmed users of the drug, in Georgia, had overdosed almost instantly after taking it. Other confirmed cases in North Carolina, Cincinnati and Chicago have similar results with deaths associated.

Grey death varies in its ingredients, but it always appears in the form of a gray powder or a gray “rock” that almost looks like concrete mix.

Components of the drug can easily become airborne, especially when in powder form, and inhaled. The potency of the drug is so strong, even brief exposure, such as through breath or even touch, can cause an unsuspecting victim (or unaware police officer or paramedic) to suffer an overdose.

McCreary County Sheriff Randy Waters said he and his officers are aware of the risks and have already begun taking precautions when dealing with possible exposure to the potentially dangerous drugs.

“We have not seen ‘grey death’ around here yet, that I’m aware of,” Sheriff Waters said. “But we are certainly aware of it and the dangers it can pose to people who come in contact with it.”

“My officers have been equipped with test kits so they could test a sample of a suspected drug when conducting an investigation,” he said. “But now, because there is so much risk with getting exposed, we will just place the sample in an evidence bag and send it to the state lab for testing. All my officers have been cautioned to make sure they are wearing protective gloves, at the very least, when dealing with an unknown substance.”

Deputies are also equipped with an emergency Narcan kit – a powerful tool to combat an opiod overdose. Narcan is an opioid blocker that can quickly counteract the effects of a drug in a users’ system.

Sheriff Waters said the Narcan kits, obtained for the department through the Champions UNITE group, can not only be used to help a drug overdose victim, but his officers as well.

“If they were to somehow get exposed to this, those kits can save their lives,” he said. 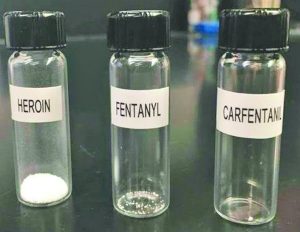 Lethal doses of three of the common ingredients of the drug show just how deadly they can be when combined.

While instances of the new drug have yet to be seen locally, Sheriff Waters said he has seen a rise in methamphetamine tainted with other substances lately.

“There’s some bad stuff going around apparently,” the Sheriff said.

“Like with any drug, it is bad to begin with,” he said. “But lately it is more like playing Russian Roulette – you never can be sure of what you are going to get. Users are literally gambling with their lives.”

McCreary County Ambulance Service Director Jimmy Barnett is also aware of the increased danger to his crews due to the possibility of coming in contact with the drug.

“They are all trained medical professionals, so they know to be cautious,” Barnett said. “But this is a new threat and we have to remain vigilant when doing our jobs.”

The Indiana Department of Homeland Security has issued the following list of guidelines for emergency personnel to follow when dealing with a potential overdose case involving “grey death.”

Be aware of any sign of exposure.  Symptoms include: respiratory depression or arrest, drowsiness or profound exhaustion, disorientation, sedation, pinpoint pupils and clammy skin.  The onset of these symptoms may occur within minutes of exposure.

Seek immediate medical attention.  Carfentanil and other fentanyl-related substances can work very quickly, so in cases of suspected exposure, it is important to seek medical attention immediately. Any needle stick should be medically evaluated as soon as possible.

Do not touch any potential drug materials or paraphernalia. Carfentanil can be absorbed through the skin or accidental inhalation of airborne powder. Avoid coming into contact with needles, bags or other paraphernalia. Do not come into contact or disturb any powder that may be in the area.

Be ready to manage the victim’s airway in the event of exposure.  Opioids are especially dangerous because they override the body’s breathing reflex, causing victims to suffocate. While naloxone is an antidote for opioid overdose, it might not be available. Providing breathing assistance could help prolong the victim’s life while waiting for emergency medical services to arrive. Even if naloxone is available, always send an overdose victim to the hospital for monitoring. Naloxone may wear off before the effects of the opioid, making it possible for the victim to stop breathing again.