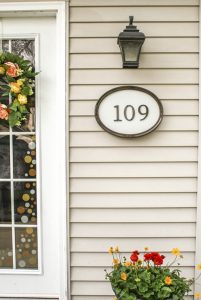 In a life and death situation – seconds matter.

For paramedics, fire crews and law enforcement officers being able to get on scene quickly and efficiently can make all the difference.

Even with advanced equipment, such as GPS and Enhanced 911, there are still instances of emergency crews having difficulty locating a residence when being dispatched on a call.

In most cases the culprit is the lack of proper addressing on homes.

“Most people don’t realize there actually is an ordinance requiring all homes and businesses to have easy to read addresses for the building,” McKinney said.

He is referring to County Ordinance 350.3, enacted in January of 1998, which states: “It shall be the responsibility of the owner of each resident (sic) and business in McCreary County to post their physical address in a manner which is readable in order to assist police, fire and/or rescue personnel in locating the business or resident in the event of an emergency.”

While on the books for nearly two decades, there has been little enforcement of the law, but officials stress by doing a simple thing such as following the law could save lives.

“It’s really a little thing,” Barnett said. “For a few dollars you can purchase numbers at a hardware store and place them on the front of your house.”

“While we have made great improvements to our 911 system, including mapping and GPS tracking, that little thing can really help.”

Barnett stated the enhanced system can only help so much, especially at night when visibility is low. Having easy to read numerals on the front of a house makes it better for emergency personnel to locate an address.

“We still have instances of having to dispatch crews to an address, but have to use descriptors such as house color to help the crews identify where they are going,” Barnett said. “In some of the places we have to go to, especially at night, that color description is just not enough.”

The ordinance calls for addresses to be clearly visible on the front of a residence – in easy to read numbers of at least 3 inches in height. The numerals should be in a contrasting color to the background: either bright numbers on a dark background, or dark numbers on a light background.

The address should also be visible from the street

If possible, the numbers should be illuminated, making it easier to see at night.

If the address is located on a mailbox at the side of the road, similar steps should be taken to make it easier to spot from the roadway. The mailbox numbers should be made out of some type of reflective material and placed on both sides of the box so they can be viewed from either direction. If possible, clear all obstructions, such as tall grass or vegetation from the sides of the mailbox frequently to prevent the numbers from being blocked.

Roadside or curbside numbering is also advisable, but not required by the ordinance. A white background with black numerals is recommended and easier to see from the road.

Barnett and McKinney also took the opportunity to discuss a possible new service that could be offered along side the enhanced 911 dispatching system.

Smart 911 is an enhanced service that adds additional layers of information and security to the existing service.

With the growing number of people getting rid of their land line phones and replacing them will cell phones, more people are online.

Smart911 is a free service that allows individuals to create a Safety Profile for their household that can include any information they may want 911 dispatchers and first responders to have in the event of an emergency, then if they need to dial 911 their Safety Profile will immediately display on the call taker’s screen saving critical seconds and even minutes in response to the emergency.

Smart911saves critical time in an emergency and has proven to save lives nationwide.  The additional information provided in a Smart911 Safety Profile enables dispatchers to know exactly where to send help and what medical assistance is necessary, those details can help them respond faster.

Smart911 allows citizens to create a Safety Profile at www.smart911.com for their household that includes any information they want 911 and response teams to have in the event of an emergency. When a citizen makes an emergency call, their Safety Profile is automatically displayed to the 911 dispatcher, allowing them to send the right response teams to the right location with the right information. Additionally, individuals can opt-in to receive notifications about emergencies or critical situations and receive alerts regarding necessary actions, such as evacuation and shelter-in-place.

Information such as who lives in the residence, any medical conditions they may have, pets, photographs and home lay-out can be uploaded in a secure database that can only be accessed when they call 911.

While he believes the added cost is worth it to provide additional services, he understands people may balk at an extra expenditure. He is asking for input from the public on their thoughts of the possibility of adding Smart 911.

“If the people want it, we will be glad to do it,” Barnett said.

Citizens with questions or comments about the proposed Smart911 system are asked to call the EMS Office at 376-5063.