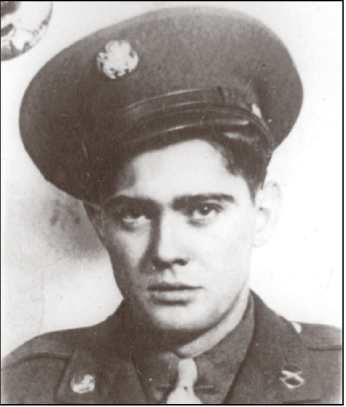 Photo Submitted: James Baker was a striking young man when he was drafted for the Army during WW II. 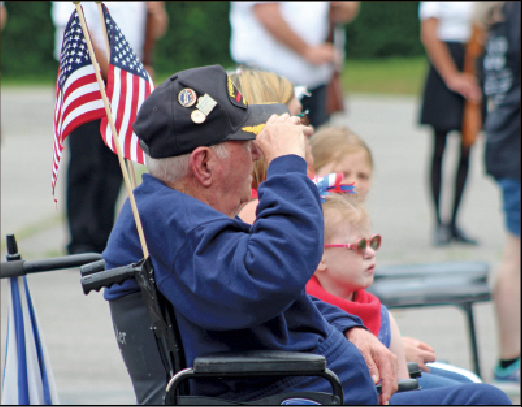 Photo by: Eugenia Jones – Baker, a recipient of the Purple Heart, recently shared memories from his time in the military with those gathered at a Memorial Day ceremony in McCreary County.

James Baker is one of those sturdy individuals whom Tom Brokaw dubbed as being among “the greatest generation”-the generation of American men and women who endured poverty during the Great Depression and faced the horrors of battle during War World II.

Born on July 20, 1923, Baker recalls the economic turmoil of the Great Depression when he and his family lived on a very small farm and kept food on their table by eating juicy peaches and healthy vegetables harvested from his father’s peach trees and garden.  Occasionally, a rare dime was spent to supplement the vegetables with a loaf of bread or dozen of eggs.

Walking to and from school each day, Baker grew up tough and strong.  Venturing out by buggy to town eleven miles away was an eagerly awaited treat for the family.

Baker recalls being with a young lady at the Lancaster, Kentucky Theatre when an announcement about the war came up on the big screen.  Soon after, at the age of nineteen, Baker was drafted into the Army for combat in World War II.  He eventually served as a sergeant with the 41st Division U.S. Army’s 162nd Infantry Regiment.

After his induction at Fort Thomas, Baker travelled to Texas for basic training.  From there, he journeyed to California to await his overseas assignment.  With a fever of 103 degrees, Baker was forced to stay on shore when the first shipload of soldiers departed; however, despite a lingering high fever, he determinedly boarded the second ship sailing off for Australia.  Baker shares how he avoided seasickness on the ship by sucking on a lemon with a hole cut out of it, and he laughs as he recalls how his expertise at making a good cup of coffee landed him the dubious job of making coffee for the remainder of the ship’s journey.

“I was never so thirsty in my life,” he recalls.  “In situations like that, you do things you normally wouldn’t.  I never thought I’d drink water from a dirty puddle.”
Leaving New Guinea, Baker moved on to fight in the Philippine Islands.  His eyes widen as he recalls his time spent in the Philippines-from the gratitude and amazement he felt when what sounded like the Japanese moving in on his unit turned out to be hundreds and hundreds of screaming monkeys to the day he was severely injured in combat.

Hit in his right leg, Baker spent time in a hospital and convalescence camp.  The attending physician wanted to amputate the leg due to the severity of the injury, but Baker resisted the idea.  In time, gangrene in the leg cleared, and Baker was temporarily given crutches.  Sent home because of the severity of his injury, Baker went on to receive the Purple Heart due to his injury in combat.  He also received the Bronze Star, Asiatic Pacific Campaign Medal, WW II Victory Medal, Army Good Conduct Medal, Honorable Service Lapel Button, Honorable Discharge Emblem, Combat Infantryman Badge, and Philippine Liberation Ribbon & Bronze Star Attachment.

Today, Baker looks forward to his ninety-fourth birthday on July 20.  The father of three children, he was married for sixty-seven years to his wife, Doris, who he describes as “the girl I knew was for me.”  Baker’s life story, filled with hard work and service to his country and his family, is a definite reminder of the attributes that make those of his generation great.