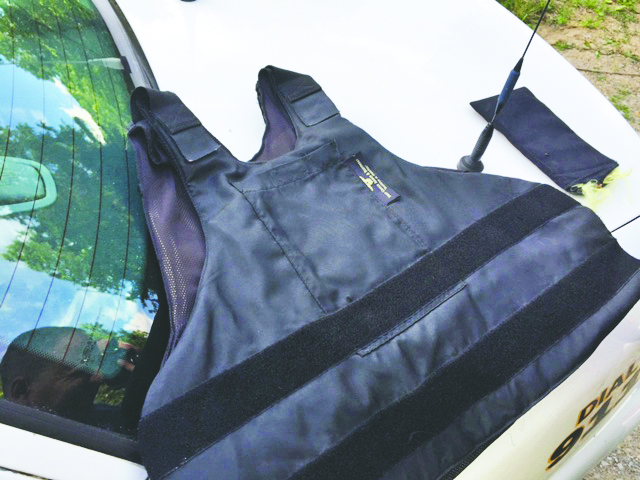 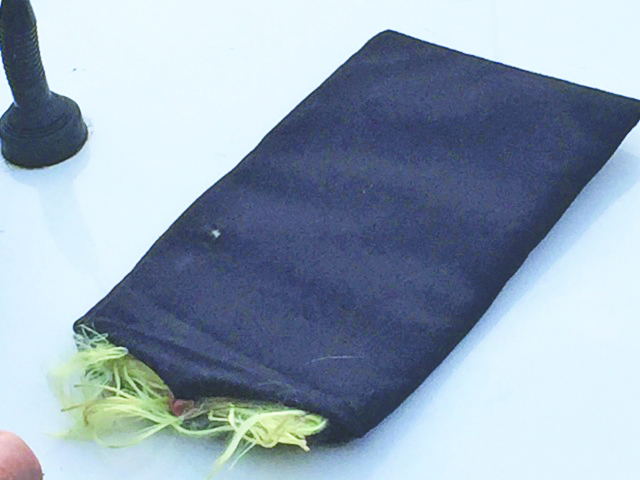 Photo by Greg Bird Authorities were able to recover a bullet fragment from Deputy Brown’s protective vest. The evidence will be examined in hopes of helping to identify a suspect.

Officials are searching for a suspect who shot a McCreary County Deputy Saturday afternoon.

Around 4:00 p.m. Saturday Deputy Frank Brown was the victim of an unprovoked and what could have been a fatal attack.

The incident occurred around 4:00 p.m. on Cowhorn Road off of Jones Hollow Road.  Deputy Brown was in the area on an unrelated investigation when he attempted to initiate a traffic stop on an older model motorbike. As the officer approached the subject on what he described as a red dirt bike, the subject turned and fired two shots from a handgun at the Deputy. One shot struck Deputy Brown in the chest, but the officer was wearing a bulletproof vest, which prevented serious injury.

With crews on the ground and in the air, search operations continued for several hours, but were unable to locate the suspect or the motorcycle.

Deputy Brown was transported to the Lake Cumberland Regional Hospital by McCreary County EMS, where he was treated and released.

“We are first and foremost thankful that Deputy Brown was able to return home to his family after this incident,” Sheriff Waters said. “Words can not describe the thoughts that go through a law enforcement officer’s head when we hear about an officer being shot in the line of duty, let alone one of our own.”

“I am extremely grateful to all the agencies that responded quickly to the scene to assist in the search for the suspect,” he added. “And to all the agencies and individuals who have contacted me expressing their concerns for Deputy Brown and offering their support as we move forward.”

“My greatest hope is that we will identify the person responsible for this senseless act and bring him to justice.”

The suspect was last described as wearing khaki shorts, a black shirt, black riding boots, a black Nike backpack and a red helmet.