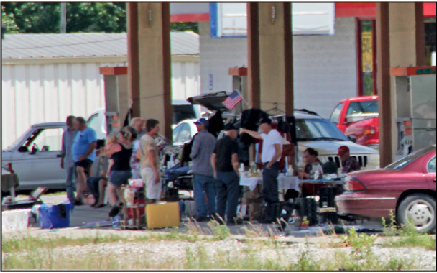 Photo by Greg Bird
Despite an ordinance prohibiting it, vendors have still been setting up at the M3 station selling wares.

With the County’s new business license ordinance in effect as of the first of the month, there still remains questions on how the bill will be enforced; particularly how it will deal with the so-called itinerant vendors who set up along the side of the roadways and on commercial properties.

One area of concern when the Fiscal Court was considering adopting the ordinance was the proliferation of the yard salers at the M3 site in particular. Magistrate Jason Mann even jokingly referred to it as the “M3 Ordinance.” County officials stated the law was a means to not only help the Occupational Tax Office with collecting taxes, but also to protect local businesses from unfair competition.

A growing trend among the vendors who set up at the M3 and other locations is to purchase pallet good, or returned items from large retail stores and sell them at yard sale-type events.

Many of the vendors at that location were asked for their thoughts on the ordinance. They either said they were unaware of the new law, or complained that it unfairly targeted people who only were holding yard sales to supplement their income.

While the law does not prohibit individuals from holding yard sales or from setting up on another property, it does require the purchase of a special business license for $50 in order to ensure the County receives its fair share of taxes on profits made in the County. It also requires written permission from the property owner to sell from that location.

Over the Fourth of July Holiday, the first weekend the law was in place, several vendors had set up shop in the old M3 convenience store lot in Whitley City to sell household items and other wares. The following weekend traffic at the site was down significantly as only two yard-salers were spotted at the location, suggesting possibly that the sellers were concerned about being cited for operating without a license.

With the law going in to effect as of July 1, many businesses and individuals are still obtaining their licenses, as there is a 30-day window allotted to them to submit the required application.

After that grace period is exhausted, the County may get more active when it comes to policing the ordinance.

Occupational Tax Administrator Stephanie Tucker said, as of Tuesday, she had already issued 335 business licenses, with several more applications pending on her desk.

Tucker was not able to provide an amount of licenses she expected to issue, but did state she had sent out more than 800 notices to businesses and individuals who may need to apply for a permit. Those notices were generated from a list of Occupational Tax accounts maintained by her office.

Tucker said she expects to conduct periodic checks of businesses after August 1 to ensure they have obtained a permit or are displaying the permit as required.

The County statute states: “anyone failing to adhere to the provisions of this ordinance by obtaining a business permit by July 1 of each year, may be penalized $5 per day. Each day violation shall constitute a separate offense.”

It further states anyone fined for not having a license will also be responsible for paying fees and interest associated with the fine and could be subject to legal action.

A business that is found to not be displaying the license “conspicuously” could be fined $50 per offense.

In addition to Tucker, who is granted authority via the ordinance to enforce the law, it also adds “law enforcement” as authorized to check for compliance, with the agency performing the check being compensated “$50 per offense to serve paperwork for the Administrator.”

McCreary County Sheriff Randy Waters said Tuesday he had not been informed by County officials what responsibilities his department would have under the law, and was unsure what statute needed to be cited when writing a citation.

Judge Executive Doug Stephens said the Fiscal Court may consider adding a “code enforcement officer” position in the future to help enforce the business license ordinance as well as other county laws.

Whomever gains the position could be tasked with ensuring local homes are signed up for garbage pick-up, or even paying 911 fees.

To read more about vendors thoughts about the ordinance click here