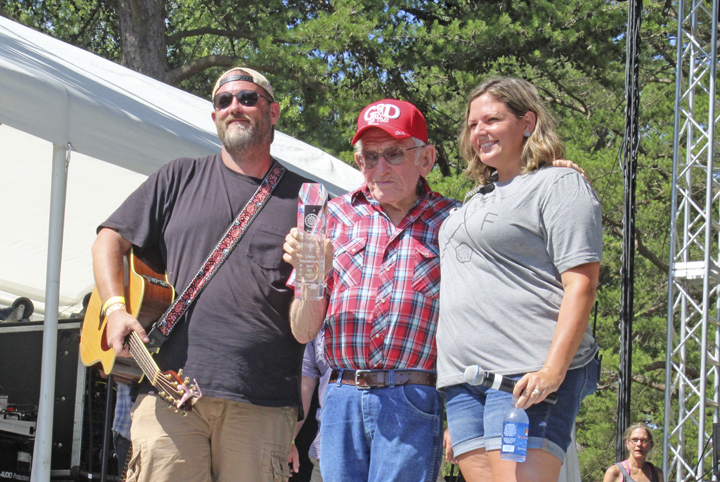 McCreary County’s beloved native son, Edsel Ford Blevins, smiled and waved at the crowd when he received the 2017 Lifetime Achievement Award and was named the 2017 Master Musician during Somerset’s 24th annual Master Musician Festival (MMF.) The award recognizes an individual who has made significant contributions to his or her field and to the arts. Past recipients include former MMF board member Jack Willhelm, Somerset Community College President Jo Marshall, and MMF founder Gabrielle Gray.
Blevins, who as a youngster began playing the banjo in the two finger style of Pop Stoneman, declared he wasn’t worthy such an honor; however, to those who love and follow Edsel’s music and life story, there was no one more worthy of the special recognition.
“Edsel is a legend in our local music scene,” MMF President Tiffany Bourne said. “When we tell our lifelong festival-goers we are honoring him it brings them to tears. Nothing rings more true to MMF’s mission than to honor someone like Edsel.”
The award was presented by Blevins’ friend, Somerset musician Kevin Dalton. Obviously emotional, Dalton spoke of the joy Edsel brings to others through his life and his music.
Dalton, along with Tommy Cate, joined Edsel on stage in performing flawlessly renditions of the gospel favorite “In His Arms” and the traditional classics “Lonesome Road Blues” and “You Win Again.” Clearly touched by the cheers of an adoring crowd, Edsel removed his cap and bowed before leaving the stage.