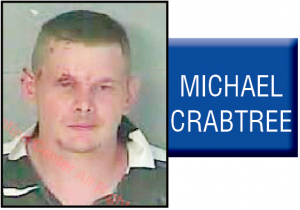 McCreary County Sheriff Randy Waters reports a Revelo man is facing several charges after leading officers on a high-speed pursuit, seemingly because he felt he could not afford to pay any traffic fines.

According to the arrest citation Deputies Derek Dennis and Alex Jones observed a vehicle pulling out from the Whistle Stop Café at a high rate of speed and running a stop sign around 6:40 p.m.

When the officers attempted to initiate a traffic stop the driver apparently ignored the request and fled from the area on to West Highway 92.

The deputies initiated a pursuit along the highway. The suspect reportedly drove in speeds of up to 100 miles per hour in the chase, and also drove recklessly, nearly causing multiple accidents as he passed vehicles on the wrong side of the road.

The pursuit ended when Crabtree ran into an embankment near the Hickman Cemetery, rolling his vehicle over on its side, about four miles from where it began. Crabtree was relatively uninjured in the crash and exited the vehicle under his own power.

Crabtree apparently told officers at the time of his arrest that he ran because he couldn’t afford “any more fines.”

He was transported to Lake Cumberland Regional Hospital for treatment of minor injuries from the accident, then arrested and lodged in the Leslie County Detention Center.

Constable Freddie Clark and Sheriff Waters assisted at the scene along with members of the Whitley City Fire Department and McCreary County EMS.