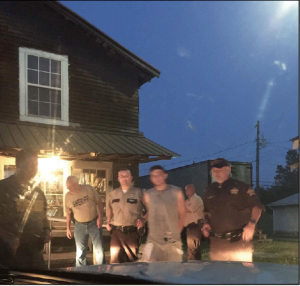 Photo submitted
Deputies Charles Perry, Cody Stephens and Milford Creekmore take Bill Minor in to custody after he led them on a foot pursuit in Strunk.

A Winfield man was arrested Thursday after attempting to run from local law enforcement and Scott County police.

Sheriff Randy Waters states Deputy Charles Perry responded to a call for assistance from the Scott County Sheriff’s Department at the state line, after they were engaged in a foot pursuit with a suspect in the area.

Deputy Perry spotted the suspect leaving a store on the Kentucky side of the border and ordered him to stop. The subject ignored the order and fled across US 27 toward a wooded area. Deputy Perry gave chase and deployed his Tazer, striking the subject, but the contact line broke on a fence and the subject fled in to the woods.

A short time later the subject was spotted at the old Bobby Duncan’s store front in Strunk, where he was arrested without further incident, allegedly claiming he was too tired to run any more.

Bill Casey Minor, 35, of Winfield was arrested on charges of fleeing/evading, resisting arrest, disorderly conduct and possession of drug paraphernalia. He additionally had two outstanding warrants for theft by deception locally.
Minor is also facing charges in Tennessee.

While searching the area for the subject authorities found a patch of nine marijuana plants, with a clear path to a residence, with growing equipment and plant food in plain sight.

Officers seized the plants and cited a Strunk man for cultivation of marijuana.