A Stearns man was arrested Thursday after reportedly turning loose a vicious dog on deputies. 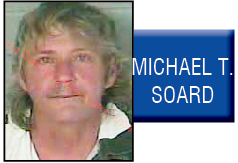 A Stearns man was arrested Thursday after reportedly turning loose a vicious dog on deputies.

Michael T. Soard, 51, was charged with harboring a vicious animal and other offenses after his pit bull attacked and bit a McCreary County Sheriff’s Deputy who was responding to a 911 call.

Sheriff Randy Waters reports Deputies Cody Stephens and Charles Perry were dispatched to Gloria Drive in Stearns around 5:00 Thursday afternoon regarding an intoxicated man in the neighborhood.

When the deputies arrived Soard was on the porch of his residence. As they approached the dog, described as a pit bull, attacked Deputy Stephens, biting him in the leg. The dog would not release his bite, forcing Deputy Stephens to shoot the dog.

Soard retreated in to his residence at that time, locking the door and refusing to let the officers inside. As the officers made entry in to the home, they discovered seven marijuana plants by the back door and a tin can containing marijuana in the residence.

Deputy Stephens was treated for a severe bite to his leg and was able to return to active duty.

In addition to the animal charge, Soard was also cited for public intoxication of a controlled substance, possession of marijuana and cultivating marijuana more than five plants.