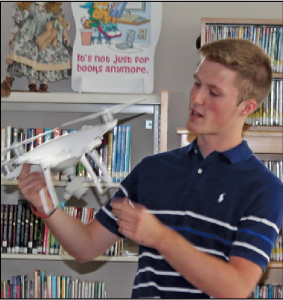 Ben Childers, a Corbin photographer who uses drones, recently presented a special program at the McCreary County Public Library. Interested adults and children learned about drones and how Childers uses them in his work. Childers has had over 4 million views of his work on Facebook and has photographed using drones in seven states. Locally, he has used drones to film Cumberland and Princess Falls.