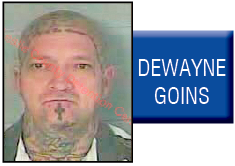 According to Sheriff Randy Waters Deputy Derek Dennis and Constable Bill Hayes went to a residence on Highway 896 around midnight in an attempt to locate a subject of a warrant.

The subject, identified as Dewayne Goins, 42, of Parkers Lake reportedly fled from the officers as they approached. Deputy Dennis called for Goins to stop, but he did not comply with the order. The deputy discharged his taser, but Goins continued to try and flee. A second charge of the taser brought Goins to the ground, where he reportedly said he was done running.

Deputy Dennis attempted to place Goins in custody, but he jumped back up, pushing off the officer and running away again. Goins jumped in to a pond in his escape attempt and the officers pursued along the edges of the water. Goins made it to the opposite shore and attempted to run in to a wooded area, but Deputy Dennis managed to catch up and tackle the subject.

The Deputy stated Goins continued to struggle as he fought to escape until Constable Hayes was able to handcuff the man.

Goins was charged with fleeing/evading, resisting arrest, assault on a police officer and public intoxication of a controlled substance and was lodged in the Leslie County Detention Center.