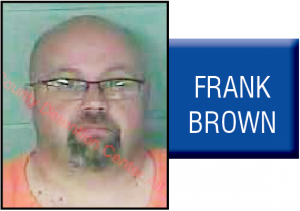 Former McCreary County Sheriff’s Deputy Frank Brown was arrested Thursday evening after an investigation in to his alleged shooting by an unknown assailant apparently revealed he allegedly fabricated the story for as of yet unknown reason.

On Saturday, June 24, Brown was on patrol on Cowhorn road in western McCreary County when he reported he had been shot by a subject on a motorbike as he was conducting a traffic stop. Brown reported he was struck in the chest, with his protective vest stopping the bullet and preventing serious injury.

Multiple law enforcement agencies responded to the scene in an attempt to locate the suspect at the time. Officers from surrounding counties and federal agencies converged on the area to assist in the search, but were unable to track down anyone matching the description of the assailant at the time.

The case, which had been under investigation since the reported shooting, apparently came to a conclusive result last week as Brown was questioned Thursday evening. His responses reportedly did not line up with earlier statements, leading to his arrest.

KSP Lieutenant Bill Elliotte arrested Brown that evening and charged him with tampering with physical evidence, official misconduct and making a false report, after evidence gathered in the investigation to the incident apparently revealed he falsely reported his own shooting.

The tampering charge is considered a Class D felony and can carry a one to five year sentence if convicted. The other two charges are considered misdemeanors.

Brown reportedly has denied the allegations.

Kentucky State Police spokesman Trooper Lloyd Cochran stated to media that ballistic evidence from the bullet fragment lodged in the officer’s vest showed it was fired from Brown’s own revolver. Additionally, the injuries reported by Brown were inconsistent with being shot.

The arrest citation filed by Elliotte states Brown reportedly admitted to lying in his original statement, but his second account of what happened contained “several falsehoods” and did not match up with physical evidence.

He was transported to the Leslie County Detention Center after his arrest, where he later bonded out.

McCreary County Sheriff Randy Waters has referred all questions to the Kentucky State Police, who led the investigation in to the incident, but did release the following statement:

“Based on information and evidence collected after the reported shooting, I had suspended Deputy Frank Brown and relieved him of his duties pending the outcome of the investigation.”

“All information and evidence had been turned over to the Kentucky State Police, whom we have been working closely with since the incident, and will continue to do so as the investigation proceeds.”

Sheriff Waters added that the incident served to damage the public’s trust in law enforcement – something that does not sit well with him.

“I want to make this absolutely clear: no one is above the law,” Waters said. “Putting on a badge does not place us above the citizens we are served to protect. The badge is a symbol that citizens can look to in times of trouble. Anyone that abuses the public trust not only harms this department, but also damages the reputation of law enforcement officers world-wide.”

Sheriff Waters confirmed Brown was serving as a volunteer Deputy at the time of the shooting; only working weekends. He had been a member of the Department for only a few months, the Sheriff added.

Brown’s first Court appearance was scheduled for this morning (Thursday) in McCreary County District Court for an arraignment hearing.