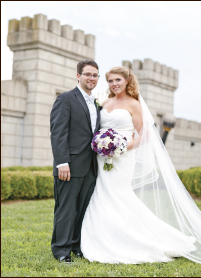 Lesley Dannielle Lawson, daughter of Dan and Pam Lawson of Whitley City, Kentucky, were united in marriage on July 1, 2017 at six o’clock in the evening to Cody Enoch King, a son to John Paul and Sandra King of Pine Knot, Kentucky.

The ceremony was officiated by Preacher David Ball, of the Whitley City Church of Christ. The wedding took place at The Castlepost, in Versailles, Kentucky. The couple had an intimate wedding ceremony held outside the front of the Castle. The reception took place in the Castle’s ballroom and dancing occurred on the roof of the Castle. On the eve of the wedding a rehearsal dinner was held at Bella Notte in Lexington, Kentucky.

Given in marriage by her parents, and escorted by her father, the bride wore a strapless fit and flare couture Matthew Christopher gown of ivory silk chiffon, with a French lace overlay accented with horsehair, and her late grandmother’s pearl earrings. She carried a satin hand-tied bouquet of different shades of purple roses, white hydrangeas, and Lisianthus.

The couple have dated since they were seniors at McCreary Central High School in 2011.

The newlyweds honeymooned in St. Lawrence, Barbados in the West Indies, Caribbean at the Sandals Barbados resort.