Neal fulfills promise to grandmother as he keeps the “old ways” alive. 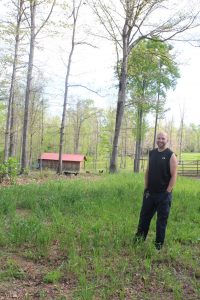 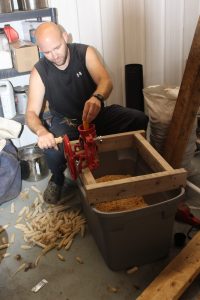 Photo by Eugenia Jones Brandon Neal of Pine Knot is a young man determined to learn and apply all he can about the “old ways” of homesteading. Neal is shown shelling popcorn with one of his many “old fashion” tools. Neal grows wheat and corn to make flour and meal. 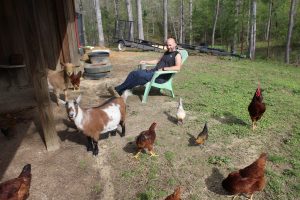 Neal sits happily with his goats and chickens. 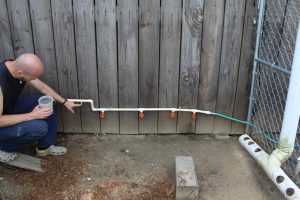 Neal created a system allowing his chickens to get their own food and water.

The simple question asked by a grandmother to her grandson as she lay on her deathbed cried out for an answer.

“What are we going to do about the old ways?”

The grandson’s answer was straightforward and tinged with soothing promise.

“Grandma, I’m learning them as fast as I can.”

Today, thirty-eight year old Brandon Neal is keeping that promise to his beloved grandmother. There is no doubt his grandmother would be pleased.

In fact, Neal is brimming over with a burning desire to learn about “the old ways” and to prove, if to no one other than himself, that he can live without relying on modern conveniences if need be. Fulfilling his grandmother’s wish for the “old ways” to continue on past her own generation makes his relentless pursuit of self-reliance extra sweet.

Neal, who holds a full-time job, stays busy in his spare time studying and talking to older folks, gleaning knowledge about traditional homesteading. He then applies that knowledge to his own Pine Knot homestead.

Meandering around Neal’s six and one half acres, one comes across countless projects. His two goats range the land while chickens nest, lay eggs, and enjoy pecking their food and water from self-feeders built by Neal. With several gardens, he focuses on a variety of crops including corn, wheat, oats, popcorn, and pinto beans. Bees swarm ‘round their hives while fifteen fruit trees scattered across the acreage whisper sweet promises for future months-honeyed promises of a luscious harvest for Neal and readily available pollen for the bees.

Neal strives to make every aspect of his homestead support the circular cycle of life and survival. The guttering of his home is designed not only to protect his shelter from water damage but also to help him collect rain water and provide irrigation for his gardens. The browns and greens of leaves and plants fulfill their living purposes and then, in death, become compost and mulch for enriching the soil. Crops are carefully tended with specific purposes in mind-be it to feed himself (including wheat for flour and corn for meal), to feed his animals, to provide seeds for replanting, or to provide cover and nutrients for the soil.

Scattered “volunteer” plants, including popcorn, potatoes, and pinto beans, sprout up from past gardens providing random, early harvests before the annual spring gardens are ever planted. Three types of worms, raised by Neal, are nurtured in soil packed in a buried cooler and then released to add nutrients to the soil.

“The worms fertilize the soil, the soil provides food to the animals, and the animals provide food to me,” Neal smiles as he explains the circular cycle of life and survival. “Even the eggs provided by the chickens for me and my cats to eat will go back into the circle as I grind up their shells and feed them back to the worms.”

Although Neal keeps electricity going at his homestead, he is prepared for “being off grid.” Natural resources, including wood, solar, and wind, fulfill their roles by powering up Neal’s heat, air, and refrigeration. He looks forward to occasionally “going off the grid” for a week at a time and living as comfortably as his pioneer ancestors did without the luxury of electricity.

Most would find working a stressful, full time job along with a passion for homesteading as all encompassing-leaving little or no time for other pursuits. However, for Neal, it is equally important to enjoy his down time by exploring caves, rappelling from rocks, hiking trails, and having fun on ATVs. Neal’s adventures, including his homesteading, caving, hiking, and rappelling, are chronicled on YouTube.

The Appalachian Trail (AT) has special significance for Neal as he and a buddy are in the process of section hiking it for one or two weeks out of each year.

“It’s peaceful when you are out on the Appalachian Trail,” Neal shared. “Knowing you are out there by yourself but at the same time meeting awesome people along the way is just a great feeling!”

Interestingly enough, it was the wording emblazoned across a comfortable T-shirt Neal once wore while hiking the Appalachian Trail that eventually became his mantra for living life.

“I didn’t think anything about the shirt when I wore it,” Neal shared. “But it really caught the eyes of hikers along the Trail. The shirt had the phrase ‘Lab Rat Life’ written on it. I started going by ‘Lab Rat Life’ on YouTube because, after all, life is an experiment, and I’m excited about it!”

Yes, for Brandon Neal, his life truly is an experiment as he blends the best of the old ways with the new. Without a doubt, his grandmother would be proud.