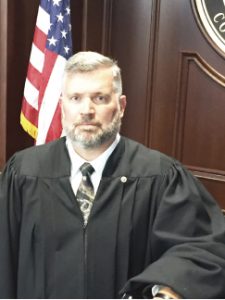 Dan Ballou, current Chief Circuit Court Judge for the 34th Judicial Circuit Court has announced his intention to run for the Kentucky Supreme Court in the 2018 election.

The Constitutional Conservative and U.S. Marine Corps Veteran issued an official statement Wednesday declaring his intention to fill the 3rd District seat on the Kentucky Supreme Court, which is being vacated by Justice Daniel Venters.

“The political climate as of late is chaotic and sometimes confusing to say the least, but the one stable and consistent standard we have is our constitution. The integrity of our founding document can never be diminished,” stated Judge Ballou.

“I have dedicated my life to defending the constitution and our way of life in America and in our Commonwealth. I believe in applying the law fairly, evenly, and without prejudice. And I believe we need people of high character as well as courage to serve on the highest court in Kentucky.”

Judge Ballou has served as a Circuit Court Judge for McCreary and Whitley Counties since his election in 2007. He ran unopposed in 2014 and retained his seat. Prior to his election he had served as a District Court Judge and as a law clerk for the United States Court of Appeals for the 6th Circuit.

Ballou received his B.A. from the University of Kentucky and his law degree from the University of Mississippi. A former active duty Marine Sergeant and a retired Major from the United States Marine Corps Reserve, Judge Ballou served honorably in Iraq, Afghanistan, and Operation Desert Shield and Desert Storm. Residing in Whitley County, he is married to Angie Partin Ballou.