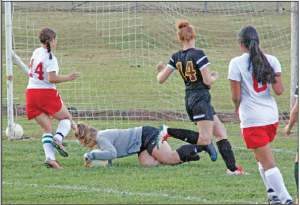 STEARNS – A longtime rival awaits the McCreary Central girls’ soccer team. The Raiders will open the 2017 season on the road at Clinton County on Thursday, Aug. 17.

High school soccer teams from throughout the state are preparing for season openers.

The Raiders, under the direction of head coach Jennifer Stogsdill, aren’t scheduled to play at home until exactly one week later when Scott (Huntsville), Tenn., visits.

The Raiders will look to show improvement early in the 2017 season. McCreary Central exited the 2016 season on a 12-game losing streak.