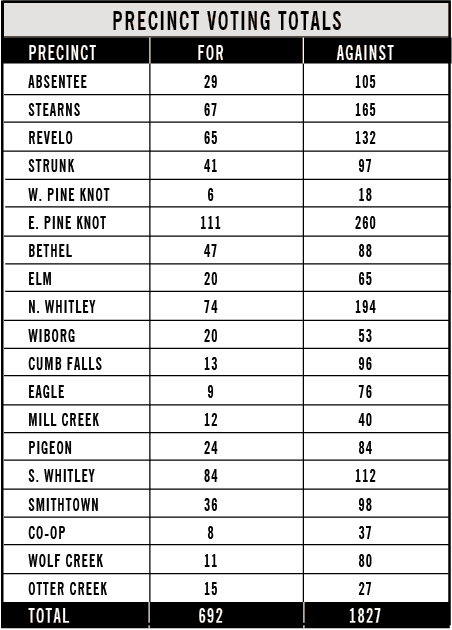 The voters have spoken and resoundingly shot down an attempt by the McCreary County Board of Education to install a special nickel tax on property values
during a special election Tuesday.

By nearly a three to one margin voters rejected the tax passed by the Board last April, sending a clear message that they were fed up with the possibility of another tax burden.

The election centered on a proposed additional tax of 5 cents per $100 of property value assessed by the Board of Education. The stated purpose of the tax would be to raise funds to repair roofs at Pine Knot Primary School and McCreary Central as well as the possible addition of a new wing at McCreary Middle. The tax would allow for state matching funds to be used for the projects and debt service.

Opponents of the tax, namely the four-person recall committee who submitted the recall petition calling for the election, stated they felt the tax would be an additional burden on an already over-taxed populace – especially coming so close on the heels of an Occupational Tax increase by the Fiscal Court.

“The voice of the people has been heard,” said Debbie Campbell, one of the members of the recall committee after the final tally was announced Tuesday night.

“All we wanted was to give the citizens an opportunity to have their say, and they did.”

Wednesday McCreary County Schools Superintendent Mike Cash said he was disappointed with the result, and that the loss would present problems for the school district moving forward.

“There are going to be difficult decisions ahead for the Board to make,” Cash said.

“At some point, as the roofs keep deteriorating, those decisions will have to be made.”

“Resources that would be used for the children may have to be used in other ways to ensure the safety of the schools.”

“The only reason the Board considered the nickel tax was the architects and engineers said we need to replace the roofs and the equalization funding was the best way to go about it.”

The Kentucky Department of Education informed Cash late Monday evening that the overall property value assessment in McCreary County had risen, which meant that the overall compensating tax rate would decrease this year by 0.8 cents per $100 of value.

Cash stated he was planning on recommending the Board adopt the compensating tax rate for the coming year, not the four percent increase that was possible.

“If you look at the past two years the assessment has increased and the Board adopted the compensating rate last year,” Cash said. “If they do so again we will have actually lowered our property tax rate by more than one cent in those two years.”

“Despite what some people have said, we are only about the kids and we are not trying to do anything but make our schools safe and provide a positive learning environment for the students.”

County Clerk Eric Haynes, whose office was tasked with running the election said the overall process went smooth, with only two minor issues being reported and dealt with on the spot.

A representative from the Attorney General’s Office was present throughout the day to observe voting and visit precincts at Hayne’s request.