This week, “The Voice” is pleased to share the life and times of 95 year old Anna Mary Creekmore. In coming weeks, we will share portions of Anna Mary’s memoir of her six week trip to Europe in 1956. Creekmore wrote the memoir based on letters she wrote to a friend in Tennessee during her travels. We know our readers will be intrigued by Anna Mary’s writings of her travels. 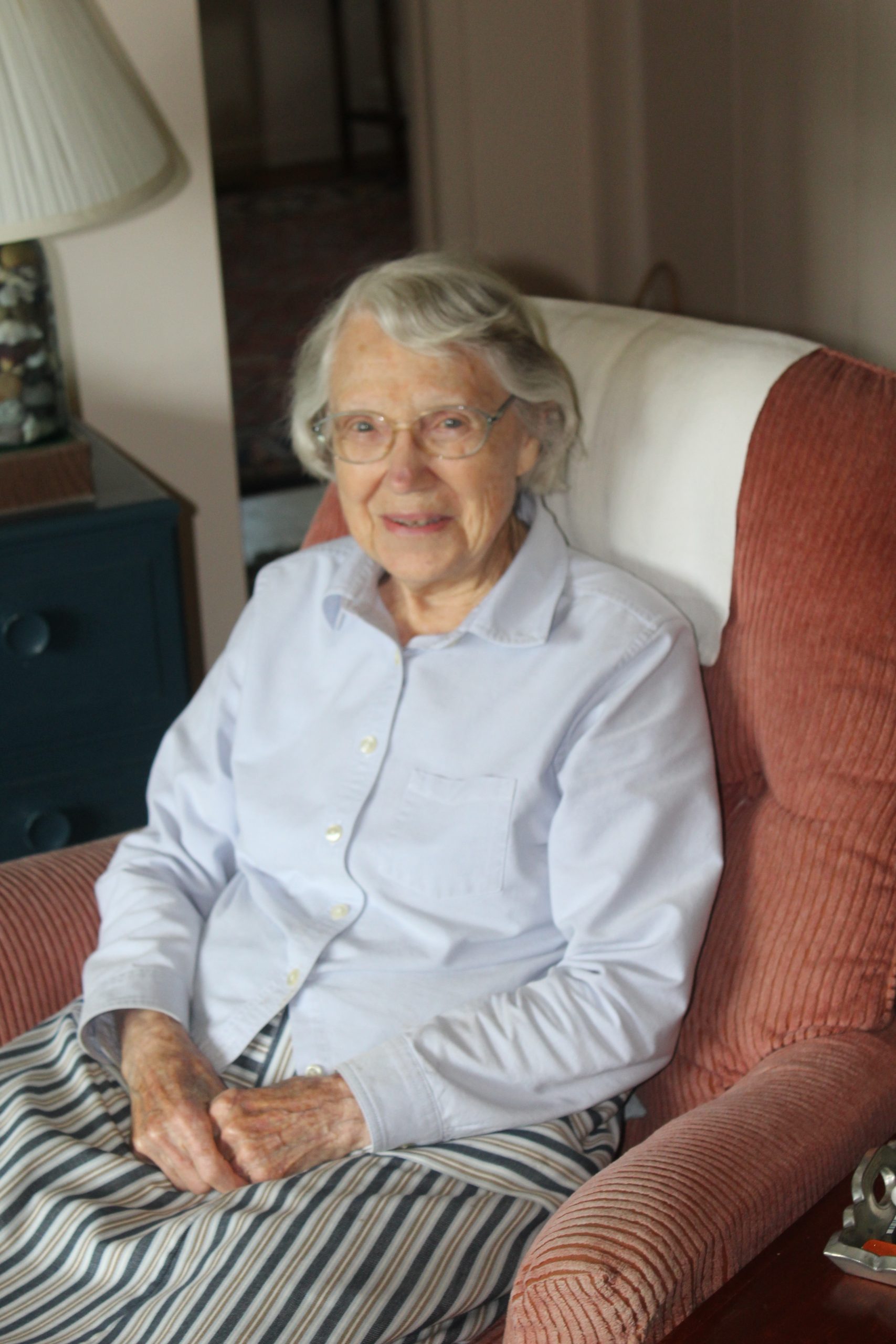 Born in the 1920s, Anna Mary Creekmore proved that young women in McCreary County could fulfill dreams of education, career, and world-wide travel.

Having lived most of her life during an age when opportunities for women were somewhat limited, Anna Mary Creekmore is an example of a woman from McCreary County who relied on hard work and determination to achieve the lofty goals of obtaining an education, an interesting career, and world-wide travels. She is an even better example of one who, despite having left McCreary County to travel and prosper, did not lose her unpretentious ways and maintained her clear love of McCreary County and its people.

Born in 1922 as one of the four children of Arthur and Dora Neal Creekmore, Anna Mary has experienced many “firsts.” Those firsts include the invention of television, the exploration of outer space, and the onset of technology. She looks back over almost a century of “firsts” and sums it up quite succinctly.

“The world has gotten smaller,” the ninety-five year old reflects. “We almost know too much about everything.”

Still spry and alert, Creekmore’s hard work, determination, and lifelong pursuit of learning are apparent throughout the intriguing story of her life. A 1938 graduate from Pine Knot High School, Anna Mary continued her education for two additional years at Cumberland College before returning home to McCreary County where she taught at the community schools of Foster and Cooperative.

Miss Creekmore’s weekly journey to teach at the Foster School was time consuming and tough. Each week, Anna Mary’s father drove her from Strunk, KY to Alum to cross the roaring Big South Fork River by boat. After crossing the river, she walked two miles to the Jones family’s home in Foster, KY where she boarded while teaching school during the week. At the end of each week, Anna Mary trekked back to the river to meet her brother and once again cross the river. She would then travel home in a pick- up truck for a weekend stay with her family.

At Cooperative, Anna Mary taught second and third grade. Getting to and from her students was easier at the coal mining camp of Cooperative than at Foster, as Anna Mary travelled by train back and forth from Stearns to ensure her students were well educated.

After teaching elementary school for three years, Anna Mary went to Knoxville, TN to attend college for a degree in Home Economics. While there, she excelled in her classes. After obtaining her degree, the ambitious young lady headed west to San Francisco to live with her sister. While still working and living with her sister in California, Creekmore received a letter from her father asking her to come home to teach Home Economics at Pine Knot High. Acquiescing with her father’s request, Anna Mary journeyed home to teach. While teaching at Pine Knot, she made the decision to return once again to Knoxville to further her education.

Once back in Knoxville, Creekmore obtained her Masters degree in Clothing and Textiles and embarked upon a career teaching at the college level. Throughout her career, Anna Mary taught and lived in several states including Michigan, Florida, and Oregon.

In 1956, she travelled to Europe for six weeks as part of an organized teaching trip focused on clothing and textiles. Anna Mary’s detailed letters written to a friend back home in Tennessee vividly documented her travels.

Today, she is still able to share her memories of the long tour in Italy, Switzerland, and Austria before flying to Paris and London.

“I remember everybody in Italy as being so pleasant and helpful-eager to visit with you,” Anna Mary recalls. “The driver on our bus was so nice-like family almost.”

Her recollections of Paris, France are not so pleasant.

“I was not impressed with Paris-not in one way or the other,” Anna Mary declares. “People were not friendly, and they wouldn’t talk much. Of course, everything in Paris was beautiful and grand to see; however, the people were not receptive. In England and Italy, people were different-they tried to help. When I travelled back to Europe in 1972, I got the same impression of Paris. The people hadn’t changed.”

During the 1956 trip, the travelers were able to attend designer fashion shows in Paris. Anna Mary recalls the Hollywood starlet, Linda Christian, being in attendance at one of the shows.

“Some of the Paris fashions were much more elegant than your typical American designs,” Creekmore notes. 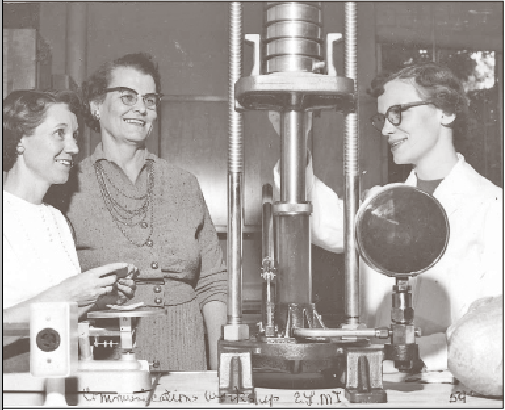 Anna Mary (on left) excelled in college as she advanced to receiving her doctorate from Penn State.

Never one to rest on her laurels, Anna Mary continued to advance her own education by obtaining a Ph.D. (doctorate) in Clothing & Textiles from Pennsylvania State.

Anna Mary spent the next several decades of her life teaching, travelling, and living in various parts of the country. However, when it came time to retire in 1984, Anna Mary wanted nothing more than to return home to McCreary County.

“I’ve lived all over the U. S.,” Anna Mary remarks. “I knew to come back here to Strunk, KY-right here on top of this ridge is a beautiful and wonderful place!”

In her retirement, Anna Mary has stayed active. During the 1980s, she was instrumental in the establishment of the McCreary County Museum in Stearns.

Anna Mary recalls the early start of the Museum.

“At first, they wanted it to be a museum just for the Stearns Company,” she declares. “But I said, ‘Oh, no! Our museum should be about all of McCreary County!’”

Anna Mary, along with others, worked tirelessly to establish the Museum. Using the knowledge gleaned from her museum experience at Michigan State and her European travels, Anna Mary took a lead role in overseeing the initial exhibits-exhibits exploring every aspect of McCreary County’s history from the days of the early Native Americans to the prosperity of the thriving coal camps.

When asked what she hopes will happen in the future for the Museum, Creekmore is quick to reply.

“I would like to see the building renovated and the upstairs opened,” she says eagerly. “I’d like to see more current exhibits detailing the continuation of McCreary County’s history.”

When prodded about her secret for living a long and active life, Creekmore ponders for a moment before replying.

“Moderation,” she responds. “Growing up here in Kentucky, we ate well-but we didn’t overeat. We simply didn’t have enough to overindulge. Throughout life, I’ve paid attention to healthy things. I never smoked, didn’t drink coffee until a bit in college, and didn’t drink alcohol-except maybe a glass of wine in Europe. I drank a lot of milk, didn’t overindulge in sweets, and I’ve always walked a lot. It’s important to stay on your feet and keep going. I think living in moderation and getting exercise are keys to good health.”

“They should study what is going on,” she advises. “Young people should never just accept what is put in front of them as the way it should be.”

Having broken many barriers to achieve her own success, Anna Mary’s words of wisdom and advice are spoken sincerely from the heart of a McCreary County woman who soared to new heights and new places while keeping her McCreary County roots firmly intact.