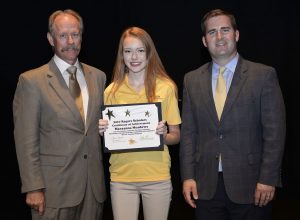 Photo submitted: Lonnie Lawson, left, president and CEO of The Center for Rural Development, and Delaney Stephens, former youth programs coordinator and community liaison for The Center, present 2017 Rogers Scholars graduate Maryanna Meadows of McCreary County with a certificate for completing the program. Meadows is a student at Somerset High School. 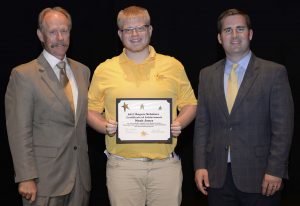 Photo submitted: Lonnie Lawson, left, president and CEO of The Center for Rural Development, and Delaney Stephens, former youth programs coordinator and community liaison for The Center, present 2017 Rogers Scholars graduate Noah Jones of McCreary County with a certificate for completing the program. Jones is a student at McCreary Central High School.

Rogers Scholars is an intensive one-week summer leadership program that provides valuable leadership skills and exclusive college scholarship opportunities for high school students in Southern and Eastern Kentucky to seize their full potential as the region’s next generation of business and entrepreneurial leaders.

“The Rogers Scholars program introduced me to amazing people and amazing experiences I will never forget,” said Meadows of McCreary County and a student at Somerset High School. “I will use everything I’ve learned and experienced to help me succeed in life.”

“Rogers Scholars truly is a one-of-a-kind program in how it’s able to enrich students,” added Jones, a student at McCreary Central High School. “I’ve already been presented opportunities through this program that have inspired me to want to make a difference in my community.”

Sixty-two high school students from 45 Kentucky counties graduated this summer from the 2017 Class of Rogers Scholars. The program was held on the campus of Lindsey Wilson College in South Central Kentucky in Adair County.

“We have had another incredible summer for the Rogers Scholars program,” said Laura Glover, Managing Director of Operations at The Center. “We’ve had students from all over Southern and Eastern Kentucky gather together to learn and grow with the program. This is an extremely intelligent and dedicated group of young individuals. We look forward to seeing what is in store for them in the future.”

Meadows is the daughter of Dan and Cheryl Meadows of Parkers Lake. Jones is the son of Felicia and Steven Jones of Stearns.

Since the program began, 1,182 high school students have graduated from Rogers Scholars, and potential scholarships valued at more than $7.2 million have been offered to graduates from 17 participating colleges and universities.

For more information about the Rogers Scholars program, call 606-677-6000 or visit www.centeryouthprograms.com.