Raiders kicked off season with 4 overtimes 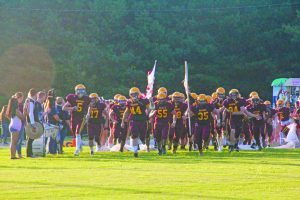 Photo by Greg Bird: The Raiders kicked off their 2017 season in thrilling fashion Friday night with a 4-overtime game against Perry County Central. The Raiders fell, 64-58, but stormed back from an 18-0 defficit to force extra time. 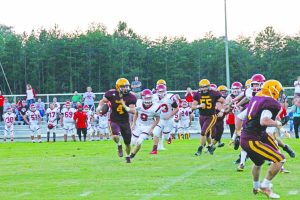 Photo by Greg Bird: Brandon Troxell looks for an opening on a running play. 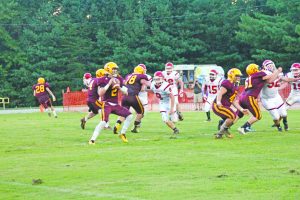 The McCreary Central Raiders’ season opener turned into a marathon. McCreary Central came up short in their opener on Friday night (Aug. 18) as visiting Perry County Central pulled out a hard-fought 64-58 win in four overtimes.

McCreary Central, under the guidance of head coach Lucas Ford, battled back after facing an 18-0 deficit early.

“We didn’t give up; we had chances to fold when we were down 18-0 but didn’t,” Ford commented. “I’m proud of the effort. We saw some good things but also saw things that we need to work on. We made too many mistakes. Defensively, we have to improve in order to win. We did a decent job of shutting down the run. They were able to throw the ball on us, though. We gave up too much.”

The Lucas Ford-coached McCreary Central football team returned to practice earlier in the week and has been busy preparing for another non-district opponent.

Coaching staffs from both high school football programs were still logging stats from the game at press time on Wednesday. Complete statistics from the McCreary Central-Perry County Central football game were unavailable at press time and will appear in next week’s edition along with compete coverage of the Raiders’ matchup versus South Laurel.