Tree stump turned “gnome home” enchants those who see it 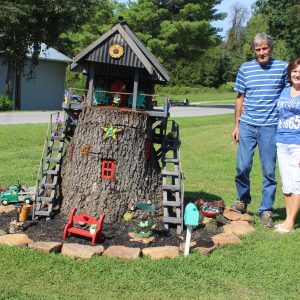 Photo by Eugenia Jones: Walter and Sue Crabtree hope their “gnome home” gives others a bit of happiness. 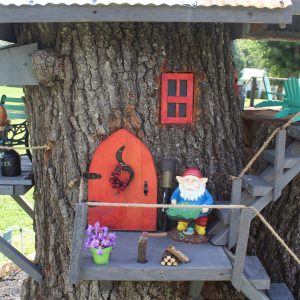 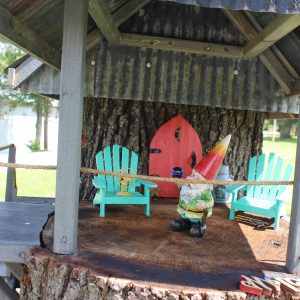 It’s hard to believe a simple tree stump can be so inviting, but for Walter and Sue Crabtree of Tunnel Ridge Road, their tree stump turned “gnome home” is an enchanting place of whimsy bringing smiles to the faces of those who see it.

“My neighbor cut the tree, and there was a big stump left,” Walter shared. “I decided to put that stump to good use by turning it into Gnomeville. I was inspired by something similar that I saw out on Day Ridge Road.”

All in all, Crabtree has spent sixty to seventy hours transforming the large stump on his property into a fine home for gnomes…a gnome home complete with roof, windows, tiny mailbox, miniature clothes line, and all the other amenities needed to turn a stump into a home. The ceramic gnomes scattered about the “stump house” are busily engaged in day to day activities-including one gnome who snoozes peacefully in his hammock on the stump’s back porch.

“I told the mailman if the gnomes ever get any mail and aren’t at home, he can just put it in my mailbox,” Walter remarked with a grin. “The mailman got a kick out of that!”

Crabtree crafted the tiny steps, windows, and doors himself. He even constructed the miniature mailbox.

“He really didn’t want any input,” remarked Walter’s wife, Sue. “He says I supervised. He already had envisioned it.”

“I went so far with it,” Crabtree said. “And then I start adding it to it. My daughter started buying gnomes for me to put with it. I built it for the whole neighborhood. I’m happy with it. I’m glad other people seem to like it, too. If I ever have a tree cut down again, I’ll probably build another one.”

Sue has a few plans of her own for the gnome home. She would like to see the gnome’s mailbox addressed as Gnomeville, KY and also plans to post a sign dedicating the gnome home in honor and memory of her grandson, Jordan New.

Sue says she notices people slowing down as they drive by the gnome home.