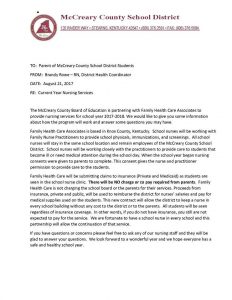 At the heart of the question is a new provider for the program and their ability to potentially charge private insurance for treatment of a student.

In May the District signed a five-year agreement with Family Health Care Associates out of Barbourville, which will allow the District to continue to provide nurses in each school, at no cost to the District itself.

But, in addition to the savings of up to $140,000 per year, Superintendent Mike Cash said a main concern when negotiating with FHCA was to keep familiar faces in the nurses’ offices.

“The big part of signing the contract,” Cash said, “was that we would continue to provide the same service, with the same nurses we had.”

Under the agreement the school nurses will remain employees of the McCreary County School District, while FHCA will reimburse the District’s costs for salaries and supplies. “All we have to do is provide a station for the nurses, which we already had in place,” Cash added.

The only significant change, Cash said, is that Family Health Care Associates has the ability to bill private insurance, whereas the Health Department could only bill Medicare.

But, he said, just because they have that ability, it doesn’t mean they will in every circumstance, and parents will be informed before any actions are taken that might require doing so.

Some postings on social media questioned the idea of having their child’s visits to the school nurse charged to their insurance, but officials say the parent will have a say in the matter.

Gina Good, Program Director of FHCA, confirmed that the ability to charge private insurance is there, but stresses parents will have the option to have their child see their primary physician if so choose.

“It is the parent’s choice,” Good said. “We do not want to treat the child without the parent’s consent. We will notify them that we can treat their child there at the school, or they can set up an appointment with their primary care provider.”

The only instance where that process may not be followed is in an emergency where a parent or guardian cannot be reached. It is for that reason parents are being asked now to provide insurance information when registering their child.

As it stands the school nurses will continue to provide the same service to students and staff as they had in the past, no matter if the student has insurance or not. If a child does not have insurance, and the cost cannot be reimbursed through other means, FHCA will absorb the cost. At no time will a student or parent be billed for services.

A letter sent to parents this week from District Health Coordinator Brandy Rowe attempted to clarify some of the confusion.

“Family Health Care will be submitting claims to insurance (private and Medicaid) as students are seen in the school nurse clinic. There will be no charge or co pay required from parents,” it read.

“All students will be seen regardless of insurance coverage. In other words, if you do not have insurance, you are still not expected to pay for the service.”

The contract calls for FHCA to provide physicals, vaccines, flu shots, health screenings and administration of daily medications as prescribed by family doctors. Some of those services may be subject to billing to private or governmental insurance, but parent consent must be given each time.

Good said FHCA has been operating for 17 years and provides school nurse services to 23 schools in four districts across the state, so she is aware that beginning a program in a new district always brings questions.

Another question is how a student would be treated in the event that they may need additional help other than can be obtained from the nurse at the school.

A Nurse Practitioner is on call for the school nurses to consult with if need arises, and the NP also will make rounds to the local schools twice a week, providing additional support.

The District had a previous arrangement with the Lake Cumberland Health District where the nurses that had previously been provided by the health department were hired directly by the School District. Budget cuts forced the LCHD to reevaluate their ability to pay for the nurses’ salaries after providing the service to school districts for years previously.

That program included the District receiving the reimbursements from Medicare and Medicaid billing on behalf of the students in an effort to cover the cost of the hiring. Superintendent Cash informed the Board that the expected funding did not fully pay the salaries, costing the District about $48,000 last year.

The new agreement means there will be no cost to the District, which allows for the continuation of having a nurse in every school building.