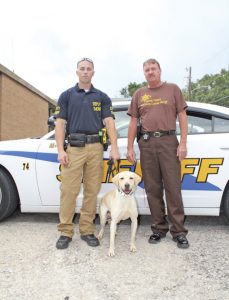 There’s a new officer on patrol with the McCreary County Sheriff’s Office. While he is considerably younger than most, and doesn’t wear the same uniform, Lyon is 100 percent a law dog.

Deputy Derek Dennis recently began working with Lyon after an intensive training course where the two officers learned how best to work together and fight crime.

Deputy Dennis said he had been thinking about working with a K9 officer for the past couple of years since he had been working in law enforcement, but knew there were big barriers as far as costs go, especially for a small county department like McCreary.

“K9 officers are very expensive, they can cost more than $20,000, and that is just for the dog itself,” Dennis said.

But Dennis found a special program that offers training and a free K9 unit to military vets and approached Sheriff Waters about the possibility of adding a new officer.

“I thought it was a great idea, and we contacted the company out of Texas to see if Deputy Dennis qualified – and he did.”

Sheriff Waters provided his Deputy a vehicle to take to San Antonio, but the cost of the training and the dog itself were picked up by the Police Dog grant offered through the GI Bill.

Universal K9, the company that provided the training, is an organization that specializing in rescuing dogs and retraining them to serve in the military or police forces.

Lyon, is a fully trained tracking and narcotic sniffing service dog and has become a welcome addition to the force.

Dennis spent two weeks in San Antonio, Texas, to train with Lyon and get accustomed to his new partner, Lyon. Lyon is a white lab, who had about a year of specialized training on his own, preparing him for his duties.

“He’s a very friendly dog,” Dennis said. “But he can get very serious when he needs to. He is a great partner to have with me on patrol.”

“We are very pleased to welcome Lyon to the McCreary County Sheriff’s Department,” Sheriff Waters said. “He will be a valuable asset in our attempts to slow down the drug trafficking and use in our county.”