Excerpts from Anna Mary Creekmore’s personal account of the Fashions and Fabrics Study Tour to Europe from July 16 to August 29, 1956. 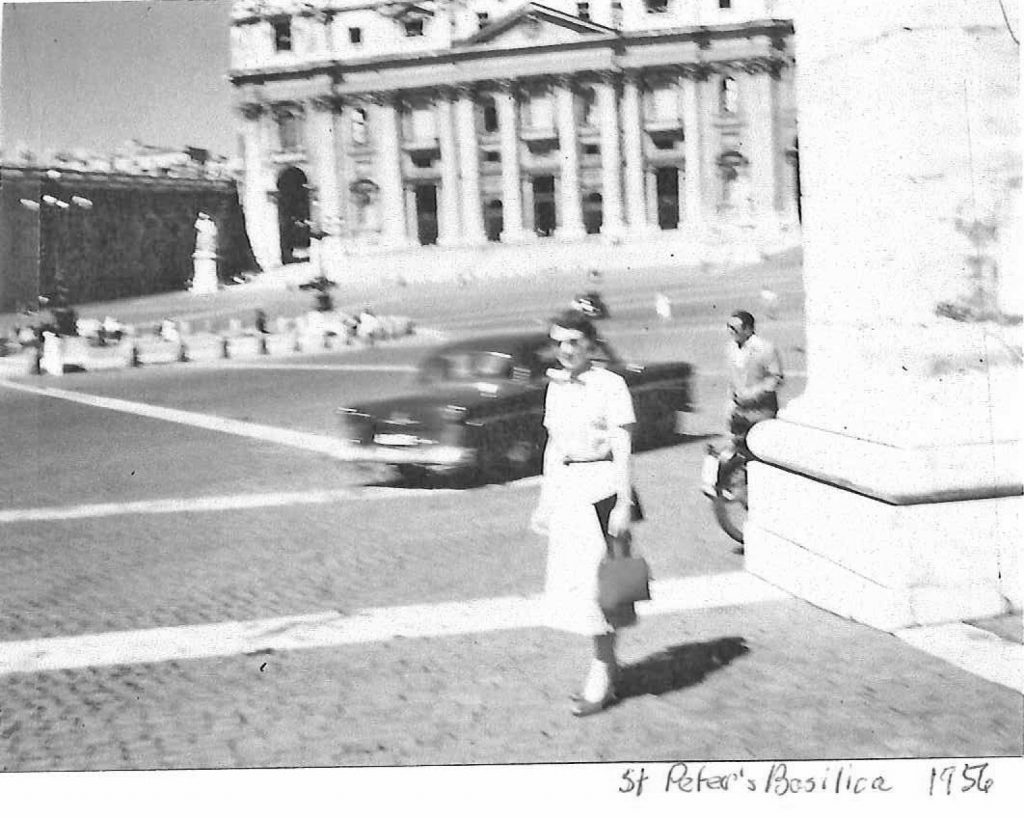 This week, The Voice continues the saga of 95 year old Anna Mary Creekmore’s European adventures during 1956 as documented in her memoir. This week, Anna Mary shares her first day in Rome visiting St. Peter’s and the Opera at the Baths of Caracalla.

The bus picked us up at 5:30 in front of the hotel. There we met the guide we would have while we were in Rome. She was excellent. At first, she seemed very remote, and I believe was scared of us. She took us to St. Peter’s by way of some of the landmarks of Rome-namely Trevi Fountain (Three Coins, etc.), Colossium, old Roman wall, etc. The bus was equipped with a microphone so it was easy for her to talk with us.

We walked into St. Peter’s through the square (called Nero’s Circle) and between the Colonnade that is so familiar from pictures. The guide gave us the history of the Basilica and told us about the paintings and other appointments. So much of the marble was taken from pagan temples-the columns also. St. Peter’s is undoubtedly the least church-like of any place I have ever been. It is huge. The central nave has nothing in the way of furniture except a canopy and an altar far down at the end. Along the sides of the nave are pillars supporting the roof and these are decorated with elaborate sculptured pieces that are realistic (called Renaissance art.) Just outside of the pillars is an area without chairs or furniture along which there are vaults for past dignitaries of the church and statuary. From this area there are eight chapels extending off at right angles. Each has an altar and other accessories typical of Catholic Churches and each is as large as a good-sized church in the States. The ceilings are carved with elaborate designs in gold leaf and there are many large mosaics. There are huge religious “paintings” which are familiar to us because copies have been used as illustrations over and over again.

As I understand it, the original paintings were done by Raphael and other masters and then others (who knew how) made the mosaics. These are made by cutting pieces of marble of the color needed and fitting them together. They are so skillfully done that there is no indication of the joinings and they appear to be oil paintings. Sometimes semi-precious stones were used when a color was needed that did not exist in marble. Gold was used often.

After being overwhelmed by St. Peter’s, we rushed back to the hotel for dinner at 7:30. It was delicious! Then we had just time to get a wrap if we thought we needed one before taking the bus to the Baths of Caracalla for the Opera.

The Baths are the ruins of the huge baths that the Romans had before the time of Christ. All that we could see were huge masses of brick in tall pillars and walls. The ruins covered an area as large as a football stadium and the two pillars that are on either side of the stage stood as high as the highest bleachers. It is a perfect setting for outdoor opera. The stage itself was immense. At one time during the performance, there were (I’d guess) two hundred people on stage and two teams of eight horses and two carriages!

And now the performance. We were seated and had just time to look around a bit before the lights blinked for the beginning of “Aida.” I was so glad that it was “Aida” since I am more familiar with that story and music than most operas. The music started and the curtain parted on the most beautiful set you can imagine. The costuming was lovely and the whole thing magnificent! During the first act, the music was rather soothing. The second act was, of course, more stirring and more magnificent. You should have seen the triumphant march!

The temperature cooled off very quickly while we were there and by about eleven most of our people began to be cold. I had a beautiful heavy knit sweater with me and was quite comfortable until about twelve. The performance lasted until 1:00 a.m. and it was 2:00 a.m. before we got back to the hotel-and even later before we got to bed!! So ended our first day in Rome…