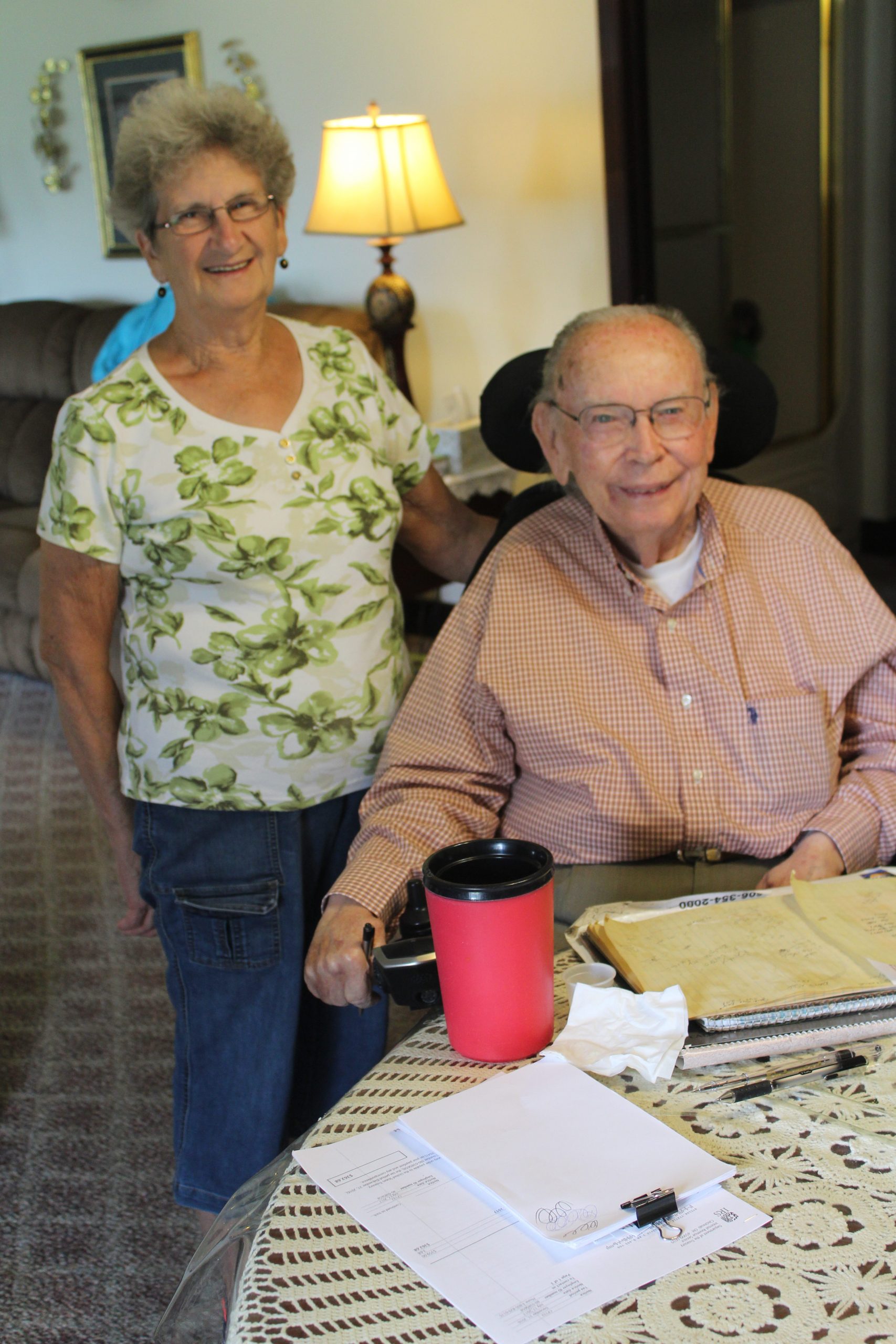 Photo by Eugenia Jones
Married for 54 years, Elmer Smith says his wife, Shirley, has been good to him.

Today at the age of eighty-one, Pine Knot’s Elmer Smith will tell you he is a survivor.

He will also tell you God has been good to him.

At a time in the mid-1930s when nine out of ten people stricken with polio did not survive, Smith was only eleven months old when he contracted the crippling disease. Amazingly, he not only survived polio but went on to become a local pioneer in proving that physical handicaps do not always limit one’s ability to achieve success. Later in life, Smith also survived two heart attacks and open heart surgery.

Born in the Bethel area of McCreary County on November 7, 1935, Smith was number six of thirteen children born to Ed and Ethel Gilreath Smith.

Already walking at the age of eleven months, polio put a sudden end to Smith’s baby steps as he spent the next six months of his life unable to move any part of his body except for his eyes. Told their child’s muscles would contract, Smith’s parents were ordered to lay their stricken child in a bed and to not touch him.

After six months of basically no movement, Smith became more active. Eventually, he learned to scoot as a mode of transportation, and he often scooted through his home faster than his family could walk.

“I was always eager,” Smith recalled. “As I got older, I was determined to do what the other boys did.”

Smith was three years old when his parents took him to Kosair Hospital in Louisville. During his one year stay in Louisville, professionals used braces to straighten Smith’s drawn legs, feet, and hands. This important year in Smith’s life marked the beginning of Smith being able to function normally again.

At the age of six, Smith began his education. Unable to attend public school, he was taught every evening by three of his siblings after they came home from school. There efforts over the next two years were not in vain, as Elmer, after entering public school first grade at the age of eight, managed to finish his work so quickly that he had plenty of time to give his teacher plenty of trouble!

“Finally, some of the real pros-experienced teachers-got hold of me and the laid the work to me,” Elmer said with a chuckle. “Teachers like Myrtle Daugherty and Houston Chitwood knew I wasn’t being challenged, and they fixed the problem.”

Smith recalled riding to school in a little red wagon pulled by two of his brothers.

“When I got to school, everyone wanted to help,” he remarked. “I never had problems with other kids. Sometimes, it was adults who made remarks.”

When Smith left the small, two-room elementary school in Bethel known as Gilreath School to go to Pine Knot High School to begin seventh grade, he was presented with new challenges. Pine Knot High School, with two levels, was only accessible to the second floor by climbing a steep flight of stairs. Students were also expected to maneuver back and forth between different rooms for classes.

Fortunately, the stairs proved to be no obstacle as anybody who came by would grab the amicable Smith and carry him up the stairs to class.

He relied on his crutches to get back and forth during class changes.
In high school, Smith did well.

“I would look at my peers to see who was making the top grade,” Smith recalled. “I would set my goal to challenge that. The top score in one class was my brother’s, and I beat him! Early on, I knew to set goals and go after them.”

Smith stayed on crutches during college. He got a degree in Accounting and Business Education plus Education at Cumberland College. He was offered a job at Pine Knot High School as a librarian, so he scurried to get a Library Science degree at Eastern KY University.

Graduating from college in July 1962, Smith went to work at Pine Knot High that fall.

“When I first started teaching, I wasn’t sure I’d stay with it,” Smith shared. “Things got smoother though, and I ended up spending 38 years in the education field. I probably learned more than my students during my first year of teaching. I remember the superintendent who hired me asking me what I would do if I had a problem with disciplining students. I responded straight up, ‘If I have a problem with discipline, you won’t have to fire me. I’ll quit.’”

In addition to being a school librarian, Smith’s career in education included three years as a finance officer at the Central Office and eight years serving on the school board.

Smith retired in 2000. He is quick to comment on what he sees as the biggest change in education throughout the years.

“The biggest change is in discipline and attitude,” he reflected. “You have to have discipline before you can teach. That changed to a big degree. When I began teaching, it didn’t take long for me to see that you have to have the respect of the parents and the students. I seldom sent kids to the office for discipline. I wanted to handle it on my own.”
Smith shared a plus that came with his having been a teacher who was challenged by polio.

“I have had kids tell me that I helped them learn to set goals and achieve them,” Smith explained. “As terrible as it was to have polio, it served its purpose in letting those students see that they could overcome obstacles and be successful.”

Ironically, vaccinations for polio became commonplace while Smith was a teacher.

“I took the vaccines to be a good example to the kids,” Smith shared. “I never did get the polio syndrome that so many with polio end up contracting later in life. Maybe the vaccines helped prevent that.”

Smith met his wife, Shirley, in 1963. As a friend of one of Smith’s sisters, Shirley would bring her food to the Smith home and sit down to eat lunch with them.

“She would look around at all of us and think she was at a camp meeting,” Smith said with a grin. “I’ve got to say she has been good for me.”

Now married for 54 years, the Smiths started a bookkeeping and income tax business together shortly after they married. Smith, who began filling out taxes for the first time when he was in eighth grade, discovered his talent for bookkeeping at an early age.

“I filled out my dad’s taxes because he couldn’t read and write,” Smith recalled. “Apparently, Dad went to work and bragged on his son filling out his taxes. Before long the boss of the saw mill asked me to keep his books. I was just in eighth grade, and he paid me six dollars for about three hours work. Dad only made five dollars for a whole day. That’s how bookkeeping started for me.”

Smith’s determination to achieve and be “just like everybody else,” is perhaps best exemplified by his having learned how to drive as a teenager.

He doggedly sat in a car and repeatedly practiced shifting gears and hitting the brake. Eventually, he asked his oldest brother to sit in the car and tell him if he was doing anything wrong.

“My brother looked at me and said, ‘Elmer, you need to learn there are a few things you can’t do. Driving is one of them.’”

For Smith, those words were simply a challenge. More determined than ever, he got a high school friend to sit in the car and teach him how to stop the car. Eventually, with an automatic transmission and his younger brother agreeing to help him learn to drive, Smith got the hang of cruising down the local highways.

Eventually, Smith was pulled over by a trooper and ticketed for driving without a license and reckless driving (passing another car while speeding.) Appearing before the judge, Smith was fined for reckless driving and given thirty days to get a license or face paying another fine. He memorized the driver’s instruction book and passed his written test with a perfect score. Next, he passed his drivers’ test and secured a valid license.

“After that, I would drive my dad to Dayton, Ohio because he thought I was a good driver,” Smith commented. “People would pay me to drive them to work in Burnside.”

Smith’s determination, spirit, and positive attitude have clearly been key factors to his success.

“When Franklin D. Roosevelt was President, he didn’t want anyone to know he had a handicap caused by polio,” Smith commented. “I never considered myself handicapped, so it didn’t bother me for people to know. I was just me. Handicaps can be an asset to us all. I was always too busy thinking of tomorrow or ten years down the road to see myself as handicapped.”

Smith has an uncanny knack for seeing the positive.

“The only time I realized I was handicapped was when I ran into a physical barrier like steps,” he declared. “But, you know, I learned patience by waiting for someone to come along and help me up those steps. There was never a boy or girl who didn’t hesitate to help me-my classmates were like brothers and sisters. Shirley and I have travelled all over, and people have always treated me with respect. Of course, I respect other people. A good attitude toward others is a big help in life.”

Smith is supportive of the laws making public buildings accessible to those with handicaps.

“Public buildings should be accessible because I pay taxes too,” Smith stated. “But I never want to see a private business be forced to shut down over those laws.”

Smith, who has a son, grandson, and two granddaughters, offered a few words of wisdom to young people.

“Set goals and get some type of training-whether it is college or vocational,” he advised. “I’ve never been unemployed. If you have training, there is a job waiting for you. It’s also good to remember the boss is the boss. You may not agree with your boss, but it’s because of them that you are working.”

Flashing a grin, Smith added one more bit of advice.

“And, don’t forget to always flash a smile,” he chuckled. “It will always melt a heart.”