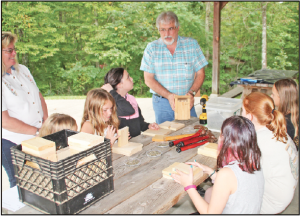 McCreary County could possibly see a new tax this year after the McCreary County Extension District filed paperwork to establish a property and motor vehicle tax for local property owners.

But, McCreary County Property Valuation Administrator Bruce Lominac has taken legal action Wednesday in an attempt to block implementation of the levy.

The Extension District filed official paperwork with the Department of revenue and County Clerk Eric Haynes indicating the District will impose a 3.95 cent per $100 value tax on all real estate, tangible property, motor vehicles and watercraft beginning January 1, 2018.

According to the filing the Extension District has the authority to impose a tax since it is considered a special purpose government entity (SPGE) or special taxing district, similar to the health Department, Library and fire local volunteer fire departments.

Lominac appeared before Circuit Court Judge Paul Winchester Wednesday morning and was granted a temporary injunction prohibiting the tax until at least Thursday’s Fiscal Court meeting where the ultimate fate of the tax could be decided.

Lominac stated his injunction effectively blocks the tax until the Fiscal Court could take action that will either accept the tax or find a way to stop it.

While the Extension District has been operating in all Kentucky counties for several decades, the local branch did not do so under the direction of a Board until the Board was officially created on August 7, 2015 when the McCreary County Fiscal Court approved the passage of Ordinance 150.4 in June of that year. That action apparently created a SPGE, giving the Board the legal authority to create the tax.

Lominac’s injunction puts the ultimate decision on the tax back in the hands of the Fiscal Court, which is scheduled to meet tonight.

The Court could take no action and accept the tax, which would satisfy the legal requirement put forth in the injunction and remove the block. Alternatively, the Court could also dissolve the Board – effectively rescinding the tax – or amend the original ordinance to remove the SPGE status.

Reportedly earlier this year the Extension District Board voted to levy the tax and submitted the required paperwork to the Kentucky Department of Revenue and the County Clerk’s Office to enact the tax as of the first of next year.

Extension Agent Greg Whitis from the local office was unable to comment directly on the tax, instead referring all questions to the University of Kentucky, which oversees the extension offices in all Kentucky counties. He did say that the McCreary County office operated under the smallest budget of all extension offices in the state.

According to filings with the Department of Local Government the local office operated with a $51,000 budget in 2017, with $23,000 going toward personnel and about $28,000 for operations. The sole source of funding for that year came from “other revenues” – $40,000 of which presumably came from the Fiscal Court.

The move to create the tax is possibly a reaction to increased budget cuts at the state and federal levels, which forces local extension offices to rely more and more on county level funding.

With no prior tax in place for McCreary County, the local branch was sometimes reliant on the Fiscal Court to provide revenue from the General Fund to help operate the facility. As of two years ago the Fiscal Court allocated about $40,000 to that end. But, County officials confirmed Tuesday that the current budget does not contain any local funding going to the district and no County funds have been allocated to the district.

As of 2016 McCreary was only one of seven Kentucky counties that did not have a tax from the extension district. (Graves, Hancock, Hart, Jefferson, Rowan and Trigg counties were the others.)

Under Kentucky Revised Statute 164.620 a fiscal court “may” create an extension district within the county.

All SPGE’s are required to submit their rates to the McCreary County Fiscal Court at tonight’s meeting. The Fiscal Court does not have any authority to dispute or reject rates from the districts, and can only note that the rates have been submitted.

Preliminary information indicates that most taxing districts in the County will keep the same rate as the previous year; with the exception of the McCreary County Public Library, which is expected to lower their rate .1 cent to 7.5 cents per $100.

According to Kentucky Revised Statutes the Extension Districts were created to:
“provide for aid in disseminating among the people of Kentucky useful and practical information on subjects relating to agriculture, home economics, and rural and community life and to encourage the application of the same in the several counties of the Commonwealth through extension work to be carried on in cooperation with the University of Kentucky College of Agriculture and Home Economics, and the United States Department of Agriculture.”