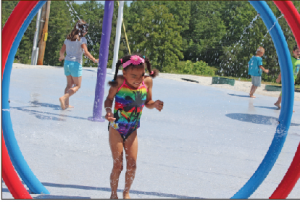 Photos by Eugenia Jones
The spalsh pad was a success this summer, but now Park officials are looking at ways to cut down on water bills.

Labor Day marked the end of the first season for the new splash pad at the McCreary County Park, but park board members and others are already making adjustments to reduce operating costs during the 2018 summer season.

Although many children enjoyed using the splash pad over the past summer, officials discovered the cost of using non-recirculated water averaged roughly $2,000 per month for water alone. Hoping to drastically reduce the operation cost next summer, park board members have decided to convert the splash pad’s water system to a recirculating system. Park board members estimate converting the system to use recirculated water will reduce the cost of water as much as 75%.

First steps to converting the water system include determining the gallons of water needed per minute for the pad and uncovering the system lines to determine if any need to be replaced. Officials will then have to submit blueprints of the splash pad to obtain approval and proper permits before proceeding.

In other business, the Park Board accepted the resignation of Board Member Mindy Creekmore and recommended Sam Strunk, Jr to fill the resulting vacancy on the Board.

Park Director Vanover updated the Board on plans for the annual Halloween in the Park event. The date for the event is Saturday, October 21 from 1:00-7:00 p.m. The hours for the popular event have been expanded this year to allow for more vendors, more music, and more activities.