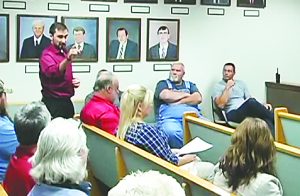 Photo by Greg Bird
County Attorney Conley Chaney accuses PVA Bruce Lominac of a political motivation behind his attempt to block the Extension Board tax.

The sparring came after Lominac asked the Fiscal Court for clarification on what they intended to do about the proposed tax of 3.95 cents per $100 of value on real estate and motor vehicles and will go directly to the Extension District.

The Extension Board, which oversees the finances of the Extension District, was created by the Fiscal Court in 2015. Under state law the Board has the legal authority as a Special Purpose Government Entity to impose such a tax.
Lominac had filed an injunction in Circuit Court prior to the meeting to stop any tax from the district to give the Fiscal Court an opportunity to take action that could prevent it taking effect.

“It is my responsibility to compile and keep the tax rolls,” he began. “I need clarification about if you intended for that board to be able to set taxes. If you did, you don’t have to do anything.”

Judge Executive Doug Stephens said the Extension Board was created following KRS statutes.
Magistrate Roger Phillips asked County Attorney Chaney for a legal opinion on if the Fiscal Court could eliminate the board, which would negate the tax request.

Chaney cited KRS 65A.050, which details how governments can dissolve special purpose government entities.
The statute describes the circumstances in which the SPGE can be dissolved only if the entity has taken no action for two or more consecutive years, fails to register with the Department of Local Government or fails to meet reporting regulations for two or more consecutive years.

If those criteria are met, then the governing body can begin steps to dissolve the entity.

Chaney stated he felt that the Fiscal Court had no legal authority to act under that statute.

He also explained that the Fiscal Court has no control over special taxing districts and the rate they choose to set.

“I see no authority to dissolve that board,” he concluded.

Lominac stated he believed the County Attorney was incorrect; noting that he felt the Fiscal Court does have the authority to “undo anything they did.”

Lominac acknowledged that the Extension Board was a proper board, but was unsure that the Fiscal Court understood that they were creating a special taxing district when they created it.
“It’s up to you,” he said. “If you want to put the tax on, it’s fine. If you don’t, I gave you the option.”
Chaney interjected at this point, stating he felt Lominac’s actions were geared toward a “political purpose,” specifically against him.

Chaney claimed Lominac had approached him a few months ago and wanted him to fire two individuals working in his office. Chaney said Lominac had threatened to make sure Chaney would not get re-elected if he did not dismiss the employees.

Lominac laughed at the suggestion.

At one point Magistrate Phillips interjected stating he felt Lominac was putting on a show.
“We asked our legal advice and he said we can’t do it,” Phillips said. “All he (Lominac) is doing is grandstanding for election. Just like he did with the mines last year.”

Deputy PVA Joni Carson was also in attendance and asked: “what does this have to do with the tax?” when the conversation turned away from the tax and on to personal matters.Carson also noted that the Extension District’s budget would increase by more than 200 percent, from about $51,000 per year to $191,000 with the tax in place.
Lominac wrapped up his statement by saying he felt that the Fiscal Court did not seem to care about the additional tax and left the meeting, with Carson in tow. But, before exiting the room Carson had one final comment for the

After the outburst the meeting continued as planned, with representatives from the Library, Health District and Extension District to present their tax rates for the year.

Kay Morrow, of the Library stated the Library tax rate would lower by 0.1 to 7.5 cents per $100 due to the increased property evaluation.

Kim Tucker from the Health District stated their tax rate would remain the same at 4.0 cents. Other tax districts, who were not in attendance will maintain their current tax rates as well. (Fire districts – 10.0 cents, and Soil and Conservation – 1.7 cents.)

The County also lowered its tax rate to 9.4 cents on real estate, and kept the motor vehicle tax at 20.4.
Extension Agent Greg Whitis spoke next, explaining the process the Extension Board used to decide to implement the tax and the reasoning behind the rate.

Whitis said recent funding concerns from federal, state and local levels prompted the Board to examine ways at securing funding for the office, and to examine what needs could be addressed with the money raised.

Whitis said the Board decided the district needed a full time 4H agent, and about $41,000 of the tax would go toward that purpose.

Other costs, such as travel, office expenses, insurance and professional development would be covered with the revenue.

In other Fiscal Court actions Thursday:
The court approved a bid from First Priority Emergency Vehicles Inc. to refurbish an ambulance. Director Jimmy Barnett stated the $92,000 project will be paid for through a $50,000 USDA grant, $20,000 from another grant and the remainder from money saved in the Ambulance Service’s vehicle fund.

The court approved new policies for the McCreary County Sheriff and County Court Clerk to satisfy audit requirements, and accepted the tax settlement from the Sheriff.

Ambulance Service Director Jimmy Barnett spoke with the Court about using the agency used by his department for collecting delinquent payments.

The Court agreed to expand the existing contract with Hill Crest Collection Agency to allow the company to look at collecting past due jail housing bills, Occupational Tax delinquencies and outstanding loans from the Revolving Loan Fund.

The company does not require up-front payment from the county, but would take about 30 percent of the revenue gained from collections.

The Fiscal Court will meet again in regular session on Thursday, October 12.