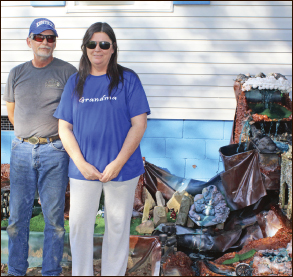 Unruly four o’clock flowers once occupied the flower bed in front of Kevin and Anita Childer’s home in Pine Knot. Their decision to replace the out of control flowers with shrubs ended up as a dismal failure when Anita’s shrubs died and had to be pulled up by their roots.

“Apparently, I can’t even grow mold,” Anita said with a hearty laugh. “Kevin said we should just turn the area into a rock garden. So, this is all his! This is all from his mind, and I’m just support!”

“My mind got started with this, and it just kept going,” Kevin said with a grin as he nodded toward the display. “There are sundry things in there-actually just “stuff” I had lying around.”

Kevin started his rocky project by converting old house gutters into elaborate waterfalls and waterways throughout the garden. In one area, he used a cleverly disguised “junk” coffee table to support a section of guttering. Adding solar lights to brighten the display and rigging an electronic trinket to react with the water to create smoke billowing upward from the caves and volcanoes. Childers used the spray insulation foam, Great Stuff, for filler and to add dimension.

The garden took on its own personality when Kevin began naming specific sections of the display. The Matter Wells, named in honor of an Aunt Matter who gave Kevin a platypus figurine, is located where the platypus frolics in a pool of water beneath a waterfall. Not far from the Matter Wells, one can find the Lair of the Mist Monster—with a monster peeking out from his cave as a dewy mist swirls above him. A buffalo stands amidst the Wasted Lands, and Sky Falls tumbles down feeding the garden’s waterways and providing a main focus point for the display.

“Watching kids enjoy the garden is the most fun,” Kevin remarked. “They run around trying to figure out where the water comes from and worrying the platypus is going to drown. I’ve just kept expanding it. There would just be a muddy spot there in the yard if I I hadn’t built the garden, and, believe me, the garden is a lot better than that!”