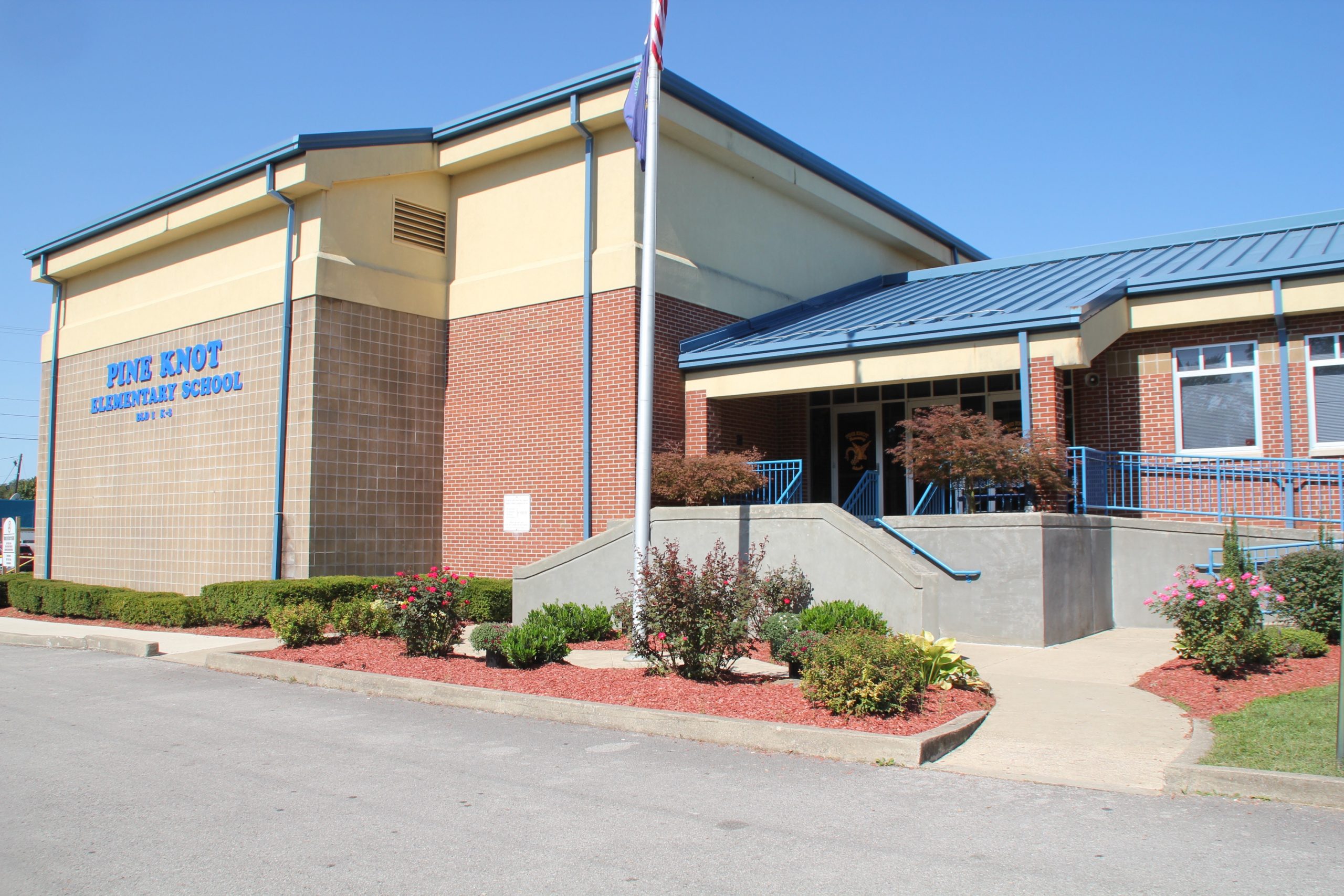 Photo by Greg Bird
The former Pine Knot Primary School has merged with its neighbor across the street to form one school – Pine Knot Elementary.

Pine Knot Elementary School is entering its second month as a newly unified school. Gone are the days when one side of the street was Pine Knot Primary, while the other side was Pine Knot Intermediate.

With the start of the 2017 school year, both schools have been merged in to one, cohesive unit under the same umbrella.

While the move was officially announced after the close of the last school year, plans to merge the two schools were being developed for a while.

The idea behind the merger was explained as a means to unify all classes under one umbrella, better allowing administration and staff to more accurately monitor individual students’ progress from pre-school through sixth grade.

When the schools were separate facilities there sometimes was disconnect between the buildings, even through constant communication between administrators and District staff.

Third grade students at Pine Knot Primary tested as part of the K-prep program in reading and math, but their scores were included in the Pine Knot Intermediate assessment results.

Sometimes that worked out well, while other times the overall score suffered.

Rebecca Blakely, Principal at PKE says now that the two buildings are together as one school, the staff can work together under one curriculum, providing a more unified and aligned teaching structure from a student’s first days in the school.

“We are continuing to evolve to meet the needs of the students, in the best possible way,” Mrs. Blakely said.

“Everybody needed to be on the same page. It was kind of disjointed before but now it’s all one unit and we can work as a team to ensure we can give each student the attention he or she needs to succeed.”

“As one school we can make decisions on a student at an earlier stage in their development, so we are able to get a better understanding where a child is developmentally and take steps to get them the help they need and encourage them to push themselves harder if need be.”

Principal Blakely says the most difficult part of the transition came before the school opened its doors last month.

“The bulk of the work was done in the summer,” Mrs. Blakely said. “Putting the schedule together, hiring teachers, assigning rooms and getting people placed. We have been very busy getting things squared away.”

“This year, we have one principal between the two buildings, they did away with the curriculum position, and we have one librarian, one counselor. The workload has really increased for a lot of us, but we are working together.”

An assistant principal (Susan Tucker and Roger Daugherty) is situated in each building, with the two positions swapping locations several days a week to help them know all the kids and their families in both buildings.

Blakely said coordination is key for her and her staff to manage two buildings at the same time, but it seems to be working fine.

“We have a routine in place for all of us, and it is working out well,” she said. “I certainly have to keep myself organized. I have clipboards in both schools with bus, class and staff schedules so we can know at a glance what is going on where.”

Mrs. Blakely said she was afraid of the possibility of the two staffs having an “us vs. them” mentality, but she has not seen any evidence of it so far.

“We did move some teachers from both buildings over, mixed them up, so I think that has really helped with that,” she said.

The merger did have some drawbacks, such as also losing one Family Resource Service Center and librarian, but the staff has been working hard to ensure that the students’ needs are met, with those positions regularly moving back and forth between the schools.

Despite all the changes at the administrative level Mrs. Blakely says students seem to be taking the change in stride.

“I don’t think they have seen the difference,” she said. “The only thing I have seen is some of the older kids have asked me where I have been since they may not see me all the time as much.”

Perhaps the only noticeable change for students is the rotating of classes for third grade students.

Mrs. Blakely says having the children rotate classes allows for the teaching staff to focus on individual subjects, such as math and reading, allowing them to teach more to their strengths and allowing all students to benefit from that expertise.

“Some teachers are better in certain areas than others,” she said. “They can focus on all the research based strategies, all the newest programs and curriculum, to teach the standards for that subject.”

“We have seen success with that. If I have an awesome math teacher, why would just 25 or 30 kids have that teacher? This way, I can have all 150 kids get taught by that person.”

Mrs. Blakely said she has not heard any negative comments from parents, and feels the community as a whole understands the reasoning behind the change.

“The parents have been very receptive,” Blakely said. “I have had a lot of positive things, especially comments about the Dragon mascot as it is part of Pine Knot history.”

Instructor Karen Kidd, who taught fifth grade at PKI last year and moved across the street to teach second grade this year says she is pleased with how things are going.

“I really like it,” Kidd said. “It has been a great experience. We all feel like a family. Merging the teaching staff together makes us united with the same goal. That matters to all of us.”

Teacher Wendi Smith also feels that the move has been positive for the school.

“Not much has changed other than some staffing and the administration,” Smith said. “I think we have blended well and really haven’t skipped a beat.”

Time will tell if the move will pay dividends for the school and the District as a whole, but the staff at Pine Knot Elementary seem to welcome the challenge.