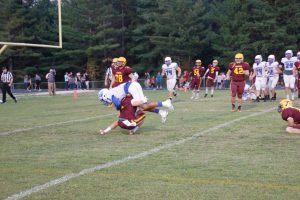 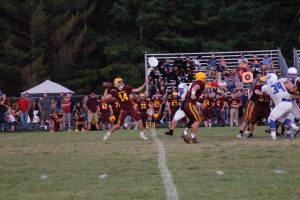 The Raiders gave the Bobcats quite a scare Friday night, scoring 43 points against an opponent they have previoulsy only scored on three times over the past 8 contests.

McCreary’s offensive attack was only the 8th time in the past 9 seasons that Bell has allowed that many points to an opponent – in fact. the last 7 times all came last year.

Visiting Bell County took to the ground early and often on Friday night, eventually pulling away to beat McCreary Central 75-43 in a Class 3A, District 8 football game.

McCreary Central slipped to 2-3 overall and 0-1 in the district with the loss.

Bell County, under the direction of legendary head coach Dudley Hilton, rushed for 605 yards in the win. Amassing over 700 yards of total offense, Bell County passed for 96 yards.

Through the air, Bell County quarterback Issac Collett completed three of eight passes for 44 yards and one touchdown.

Jason Jones hauled in two pass receptions for 39 yards for the Bobcats while Ethan Murray was on the receiving end of Collett’s scoring pass.

Through five games, much-improved Bell County has outscored opponents 198-125.
Defensively for Bell County, Antonio Zachary recorded two interceptions, one of which he returned for a touchdown.

In addition to his pair of picks, Zachary recorded a team-best 10 tackles for the Bell County defensive unit.
Running back Brandon Troxell did his past for McCreary Central, rushing for 269 yards and four touchdowns on 29 carries. Troxell continues to rank as one of the state’s top high school running backs.
Ryan Jones rushed for another touchdown while Hunter Jones hauled in a scoring pass for the Raiders in the setback.

Dominant Bell County led 22-0 before McCreary Central arrived on the scoreboard. Then, the Bobcats were out in front 38-15 at halftime.

Heading out of the third quarter, Bell County clung to a 44-35 lead.

Both McCreary Central and Bell County are due back on the field for Class 3A, District 8 games on Friday, Sept. 29.